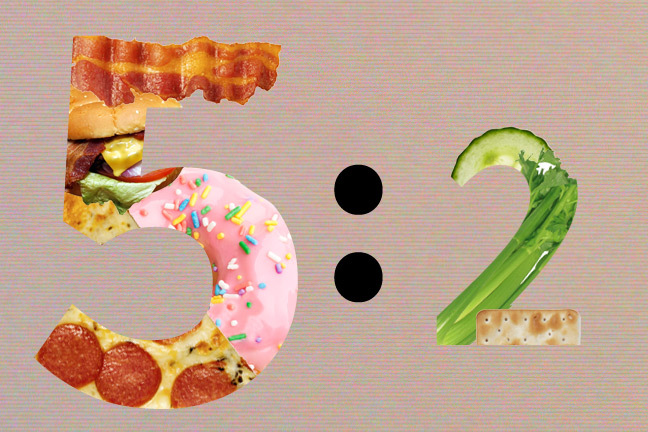 The 5:2 diet, also called the fast diet, is a new fad diet that originally became popular in the UK, and now in 2014, is beginning to capture the attention of people in the United States. In fact, in just the last couple of weeks, several members of Caliber have asked me whether or not they should try the diet for themselves. So let’s take a look at what exactly the 5:2 diet is and whether or not it’s the dieting answer you’ve been looking for.

How does it work?

Like other diets that promote periods of fasting (such as Eat Stop Eat), this diet works primarily by restricting calories. When you only consume 600 calories on 2 days of the week, you are giving yourself a very large calorie deficit to work with during the rest of the week.

Let’s take a look at the math:

As is the case with all diets, there is absolutely no magic going on here. When you consume fewer calories than your body burns, you will lose weight.

Maybe, maybe not. That all depends on how much you eat on the 5 days of the week that you’re supposed to “eat normally”. As I’ll discuss next, eating normally on this type of diet can be extremely difficult for a lot of people. And for anybody who lifts weights, the ultra low calorie days can have very negative consequences.

What are the problems with the 5:2 diet?

On the low calorie days, you’ll be miserable.

Eating only 600 calories per day is not an easy task. You have to face severe hunger pangs and very low energy levels. Most of us have to work at least 5 days a week and we just cannot afford to not be at the top of our game on any of those days, even if it’s only 2 times a week.

On top of this, you’ll start obsessing about food on the low calorie days, fantasizing about all the wonderful treats you’ll get to enjoy tomorrow, which leads us to the next big problem with this diet.

When food becomes an obsession, then binge-eating becomes a very real possibility. Which is why many people who follow the 5:2 diet find themselves eating like shit on the 5 days of the week they’re supposed to be eating normally. This leads many people to consume way more calories than they should be, devouring entire pepperoni pizzas, large milkshakes, chocolate chip cookies, and anything else they can get their hands on.

And what happens when you overeat like this? First of all, you get fat. Binge-eating can quickly erase the caloric deficit you created for yourself, especially considering the types of junk food that most people are drawn to on these days. Second, you feel terrible! So not only are you feeling terrible on your low calorie days, you’re also feeling terrible on your high calorie days.

If you exercise regularly, the low calorie days can hurt your performance.

When you engage in any sort of moderate to intense exercise, you need time for your body to recover. Eating 600 calories, even if only a couple times a week, is just not enough to provide your body with the nutrients it needs to recover from strenuous exercise.

And forget about working out on your low calorie days. You just won’t have enough energy to complete your workouts.

You may lose weight too quickly and lose a lot of muscle.

While a lot of people will tend to overeat on the normal eating days, there are certain type of people who will do the opposite and not consume enough calories on those days. This is a big problem in itself, because losing weight too fast is not healthy and can lead to all sorts of problems. One person I know described himself as “pale-faced, drawn out, and weak” after just 2 weeks on this diet.

I’m not a fan of the 5:2 diet. Sure, it will work for some people, like most fad diets will for a short amount of time. But it’s just too difficult to maintain in the long run and there are too many potential pitfalls. Why torture yourself on 2 days of the week when you don’t have to in order to see the results you want?

There is definitely a place for intermittent fasting, and we actually use the concept very successfully for many of our clients, but pushing it to this extreme is only going to do more harm than good.