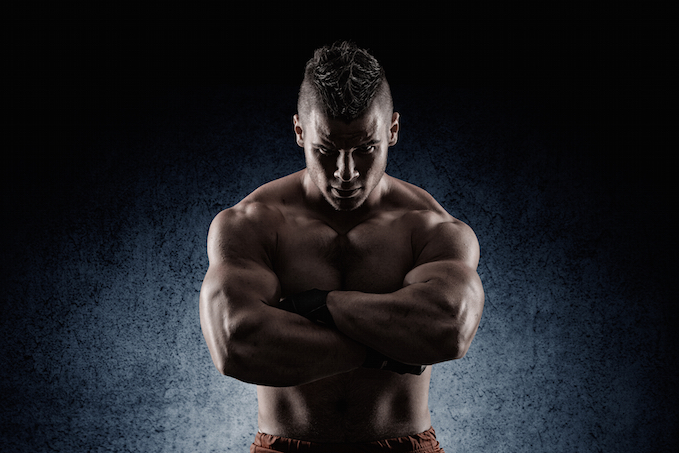 For many people, the biggest issue when it comes to getting in shape is losing weight.

However, there is also a camp of people whose primary challenge is gaining weight.

These ‘hardgainers’, as they are commonly known, are often teenagers, people with abnormally fast metabolisms – or people who just find it very difficult, for whatever reason, to consume enough calories on a daily basis.

Given all of this, it probably isn’t shocking that products known as ‘weight gainers’ or ‘mass gainers’ are often very appealing to people with this problem.

These supplements are extremely popular, and you can easily find 100s of brands either by searching online or at your local GNC.

They are generally sold with jacked-up bodybuilders on the front of the packages, promising that if you ingest their ‘special blend’ of powder you’ll be able to bulk up and look like them.

But as many people have learned, these mass gainers are not always what they’re cracked up to be…

In this article, I’m going to explore what these weight gainer shakes are, if they’re effective or not, and whether you should be spending your money on them.

What Exactly Are Weight Gainer Supplements?

Quite simply, weight gainers are a type of supplement powder – much like protein powder.

However, the key difference is that they contain an absolute ton of calories in each serving.

In fact, in each serving of the most popular brands of mass gainers, you’ll often be getting at least 1000 calories, if not more…

As for their macronutrient composition, the basic formula is that they contain a moderate amount of protein (50 grams or so), a minimal amount of fat – with all of the remaining calories coming from carbohydrates.

In addition, they’ll sometimes include other supposed ‘muscle building’ enhancers – such as BCAAs, glutamine, creatine, and vitamin blends.

And like a regular protein shake, you’ll mix up this powder in water or milk and guzzle it all down – although, unlike most protein shakes, weight gainer shakes are really, really thick, so it is often better to use a blender instead of a shaker bottle.

That depends on what you mean by ‘work’.

Sure, drinking them will absolutely make you gain weight – assuming that the additional calories you’re taking in puts you over your Total Daily Energy Expenditure (TDEE).

In this respect, they are an easy way to tip the energy balance in that direction…

However, in many cases, you won’t be gaining the type of weight that you want.

Remember, when you cut through all of the marketing hype, there is no magical muscle building formula in these things; instead, they merely serve as an efficient way to dump a whole bunch of calories into your body quickly.

So, for many people who aren’t careful, it’s incredibly easy to end up having a lot of the additional weight that you put on come from fat, instead of muscle mass.

To be clear, yes you may gain 5 or 10 pounds very quickly from drinking these things, but you may well find that the majority of it is fat weight!

This is even more likely if you’re not working out in a way that maximizes muscle growth, or end up consuming too little protein compared to carbs by relying on these for a large percentage of your calories.

The truth is that if you’re a natural weightlifter, your body can only put on so much muscle in a single month.

For instance, as someone that is newer to lifting weights, you can expect to put on 25 pounds of muscle in your first year – on the high end – if you are lifting properly and you have your diet in order.

This breaks down to roughly 2 pounds of muscle per month (again, on the high end).

So if you’re putting on 5-10 pounds in a month, as many people have claimed, what is likely happening is that these shakes are causing you to be eating at too large of a caloric surplus – meaning that you’ll put on way too much fat compared to muscle…

Fat that you’ll ultimately have to spend even more time burning off again in the future before you get the look that you want.

Well, not for most people.

You see, as I outlined in the all-too-common scenario above, there are a lot of potential pitfalls when taking these mass gainers.

What Should You Do Instead?

OK, so now that I’ve made my opinion on these mass gainers pretty clear, the obvious question is what is the best alternative?

That is, how should someone who wants to bulk up do so without resorting to these supplements?

Well, first of all, if you want to bulk up, gain weight, and build muscle properly, then you need to be eating at a calorie surplus.

However, this can come from ANY foods that fit your macros – and the whole thing doesn’t need to be nearly as unpleasant or costly as forcing down these shakes.

Instead, I recommend getting the majority of your calories from nutrient-dense, calorie-dense foods like rice, pasta, beans, bread, meats, nuts, and vegetables.

This will be more enjoyable, and altogether more healthy, than relying on these dubious mass gainer supplements.

And even if you do opt to get a portion of your protein intake from supplements for convenience, it is often healthier, cheaper, and more pleasurable to use 50 grams of quality protein powder and then add fruits and milk to increase the total calories if you’re trying to bulk up.

Let’s not go that far…

Now I don’t want to be too black and white about the whole thing, so let me briefly outline the 2 situations where you might want to consider supplementing with mass gainer shakes.

1) You have an incredibly fast metabolism, and find it really hard to get enough calories from regular foods – despite trying to focus on nutritious, calorie-dense foods, as I mentioned above.

2)You don’t have the time to eat, and literally can only get enough calories if you gulp down one of these shakes quickly to meet your targets for the day.

However, even if you feel that one of these applies to you, I would still urge you to try to increase your calories from other foods before going the weight gainer route.

Often all it’ll take is keeping track of your calories, using an app like Fatsecret or MyFitnessPal, and then slowly increasing your intake until you’re gaining the appropriate amount of weight each week.

Which Mass Gainer Brand Do I Recommend?

There are a lot of different brands of weight gainers out there, and many of them try to sell you on you the idea that you’ll put on muscle simply by taking them.

As I already discussed, this isn’t true – they should just be looked at as a source of calories, so in order to use them properly you’ll have to fit them into the rest of your diet while also working out effectively.

Otherwise, you’ll likely find that much of the weight that you do put on is fat weight…

However, assuming that you do want to try a weight gainer, and understand how to use it properly, then I would recommend going with Serious Mass from Optimum Nutrition.

It is low in sugar, low in fat, and doesn’t try to claim that it’s something that it’s not (read: muscle gains in a bottle).

And as readers of this blog know, I believe that Optimum Nutrition is one of the few mainstream supplement companies that you can trust to use higher quality ingredients, and not load up their products with a whole bunch of crap.