Should You Use The Smith Machine? 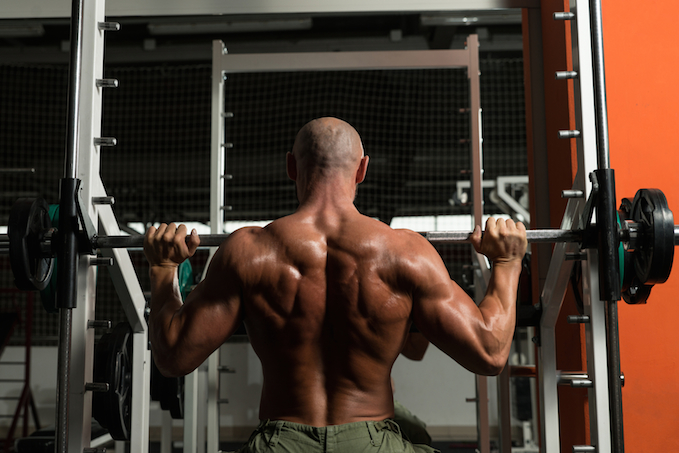 If you ask people about the smith machine in the gym, you are going to get a wide variety of responses.

Some people absolutely love it, and use it extensively as part of their workouts.

Other people, however, think that the smith machine is an abomination of the weight room – and wouldn’t touch it with a ten foot pole.

But the one thing that is plainly clear is that these things are popular.

Yup, just about every single gym has a smith machine – even those that have neglected to purchase a proper power rack – so you are probably familiar with this piece of equipment, even if you don’t know it by name.

This article will attempt to clear up some of the confusion surrounding the smith machine, and help you figure out if it should be included in your workout routine.

What Is The Smith Machine?

First, let’s take a step back and look at what the smith machine actually is.

It turns out that the smith machine is a relatively new piece of equipment – at least when compared to timeless staples like the barbel and dumbbell. In fact, it was originally introduced to the world by none other than Jack LaLanne, back in the early 1950s.

There are different variations of the smith machine, but all of them function in much the same way. There is a barbell that is fixed between a steel rail, which confines it to a limited range of movement.

The original smith machine only allowed vertical movement of the barbell; later editions, however, now allow it to go forward and backward as well.

Technically speaking, you can do a lot of different exercises on the smith machine, working out just about every major muscle group.

It can be used for squats, deadlifts, bench press, bicep curls, tricep extensions, shrugs. You name a muscle group, and you can feasibly work it out using the smith machine.

That being said, it is far more suited to certain movements than others, which I’ll discuss further in a moment.

Now that you have a better idea of what the smith machine is, and how it can be used during weight training, I’m going to move on to the pros and cons of including it in your workout plan.

The Pros Of The Smith Machine

Let’s start with the good points, shall we?

Lots of serious weight lifters will make fun of the smith machine (and I have admittedly mocked it myself).

It has a reputation for being a less-than-serious piece of equipment – substandard in pretty much every way.

But, in truth, the smith machine has certain key advantages, whether hardcore gym rats like to admit it or not!

It can give you a more isolated workout.

One of the major advantages of the smith machine is that it can be used to very effectively isolate certain muscle groups.

This is because it is locked into a fixed plane of motion, as I discussed before – and as a result, you don’t need to use nearly as many stabilizer muscles as you would if you were lifting with free weights.

For example, when you bench press on the smith machine, it is possible to isolate your chest more than you might on a regular bench press, pound for pound.

It can be safer.

This is probably the main thing that the smith machine has going for it.

The reality is that weight lifting can be dangerous. Accidents do happen – and probably will happen, if you work out long enough.

The smith machine excels in this area, reducing the potential for injury (in certain situations, at least).

You see, unlike a regular power rack or bench press, the smith machine has an inbuilt fail safe.

At any point during the exercise, you can simply twist your wrists to lock the bar back into place.

So, if you suddenly hurt your back during a set of squats, or tear your pec while benching, you can simply lock out the weight and limit any further time under tension.

In addition, the ability to lock out the weights yourself means that you don’t typically need anyone to spot you on the smith machine.

If you tend to work out alone, or just really hate asking people for a spot, then this can really make your workouts a lot less stressful.

The Cons Of The Smith Machine

Now that we covered its positive features, let’s get down to why many people hate the smith machine!

There are actually several key reasons, which I’ll go through one by one.

It locks you into an awkward plane of motion.

This is probably the biggest complaint many people (myself included) have with the smith machine.

You see, when you are benching, squatting, or deadlifting, the specific path that the bar moves in is very important.

If the bar path isn’t correct, it can both limit the effectiveness of the exercise, and also increase your risk of injury.

For instance, it is almost impossible to squat correctly on a smith machine. The plane of motion that it forces you into is awkward and dangerous, putting all sorts of unwanted stress on your knees.

The same is true when deadlifting. And don’t even get me started about doing any olympic lifts on the smith machine…

To be fair, this is less of an issue for certain exercises – ones that have a more vertical bar path, like the military press and shrugs.

However, in my opinion, even for these exercises, it is less than ideal in terms of maintaining proper form.

It doesn’t train your stabilizer muscles.

Remember how I said that one of the positives of the smith machine is that it can be used to isolate certain muscle groups?

Well, this is also a point against it, depending on your perspective.

You see, for many exercises – especially compound movements, that utilize more than one primary muscle group – there are various stabilizer muscles that help you stabilize the weight throughout the movement.

Have you ever seen someone try to bench press who has never worked out before?

Chances are that they’ll be shaking all over the place, even if they are able to press the actual amount of weight, simply because they haven’t yet developed the appropriate stabilizer muscles.

And that is where the smith machine can be a problem. Using it for the majority of your sets will only serve as a needless crutch – making it more and more difficult to take off the training wheels and expect to lift properly in the future.

Yup, if you train your bench press exclusively using the smith machine, and then try to bench press normally, you’ll likely be in for a big shock in terms of how much weight you can lift!

Summing It All Up

OK, so now that we’ve gone through the various positives and negatives of the smith machine, the question still remains – should you be using it?

I would say that this really depends on your specific situation and how long you’ve been training.

If you’re new to working out, or if you don’t have anyone to spot you, then you might want to consider using the smith machine for certain exercises – such as shoulder presses, rows, and shrugs.

However, in my opinion, it should rarely, if ever, be used for bench pressing – and should never be used when squatting or deadlifting.

At the end of the day, I would advise against using it for most people. Stick to using free weights instead.

They will train your stabilizer muscles more effectively, and you’ll be less likely to injure yourself by avoiding the limited plane of motion that the smith machine locks you in to.

Basically, if you’re serious about building muscle and increasing your strength, then you should be doing the big 3 – bench, squat, and deadlift – in a regular power rack, without the training wheels attached!