A Primer On Proper Form When Working Out 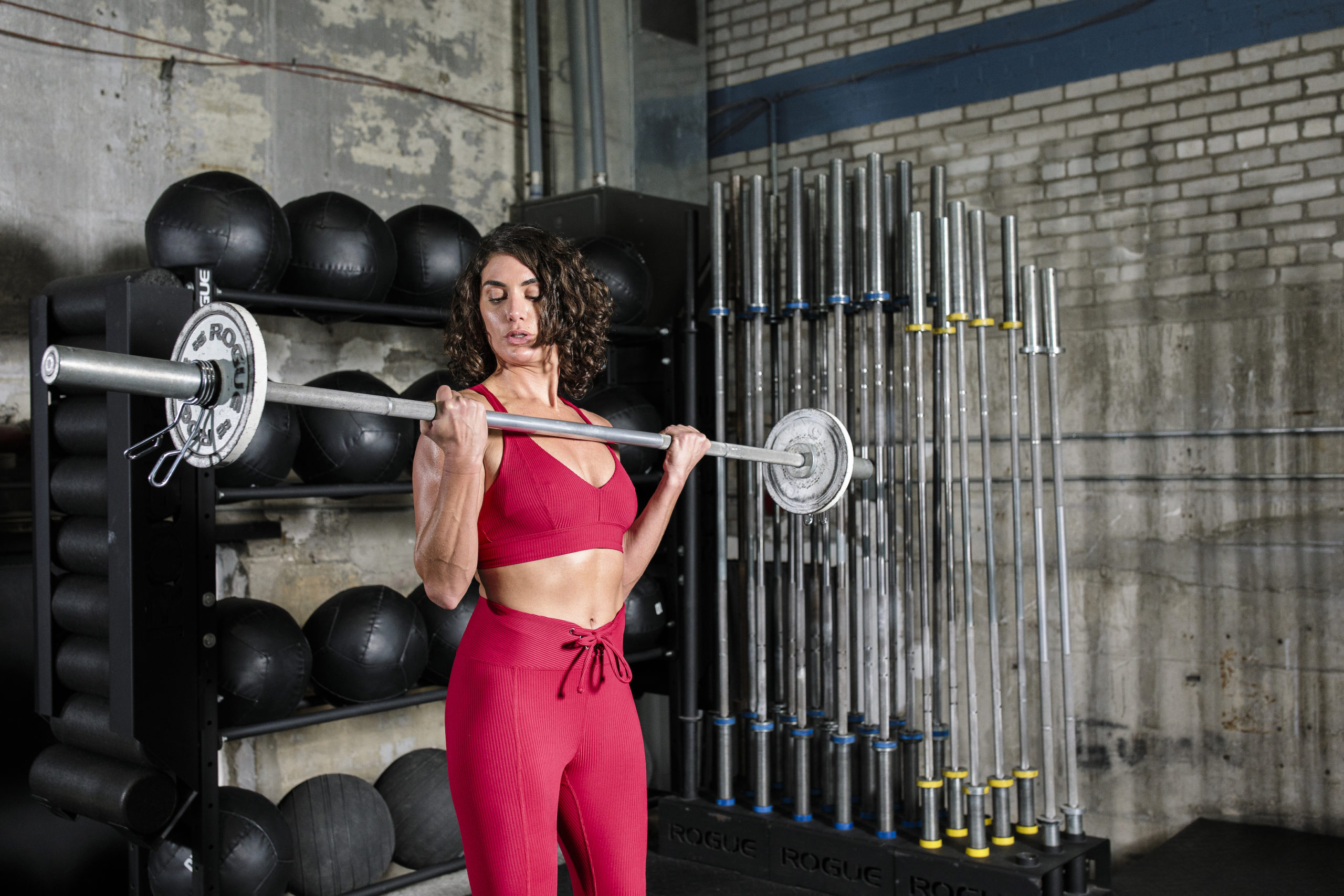 Fact: proper form is incredibly important when working out.

But you already knew that, right?

For years, everyone from your gym coach in high school, to your friends, and even other people at the gym, have stressed why you need to focus on maintaining good form when you’re lifting heavy things.

I, for one, was aware of this way before I ever entered a gym.

But you know what, my form completely sucked on a whole bunch of exercises for years!

And I was really into working out at the time – with my college dorm room packed full of gym gear, protein powders, creatine, and muscle magazines featuring massive guys who obviously never touched steroids.

Still, even though I was undeniably an aspiring gym-rat, my form still sucked – and it wasn’t even really on my radar that I needed to make it better.

How could this be?

With years of hearing over and over again about the importance of good form, why would I choose not to focus on it myself now that I was actually weight training?

Well, after spending a good deal of time in gyms over the last 13 years, I would say that my problem is shared by millions of other people around the world – all of whom are willing to put in the hours at the gym, but for some reason don’t make form a priority.

Let’s delve into why this is, shall we?

The Main Reason Why So Many People Have Terrible Form

For many people, their first taste of working out begins in high-school or college.

One day they decide to follow some of their brawnier friends to the gym – and, after arriving, they sheepishly look around at this strange new ecosystem that they want to be part of.

Everyone looks like they know what they’re doing. People are lifting heavy things up, and putting them down.

Can’t be that hard, right?

So you go over to the bench press, and put a modest 10 pound weight on each side.

Then you lie down, lift the bar above your chest, and then proceed to lower it.

It’s heavy, your arms are wobbling – but after your first set you begin to feel a new-found sense of pride.

I can do this!

So you start going to the gym regularly, and lifting more and more weight for a variety of different exercises each time.

But, unfortunately, as your muscles begin to grow, so does your ego.

You see people lifting a lot more weight than you, and your ego is not happy with this reality.

Let’s face it: the gym is the place in our modern society where people physically size each other up, looking for that sense of primal superiority.

So, fueled by this desire to be bigger, stronger, better, you start allowing yourself to cheat.

Fast forward 3 months. You are now benching 145 pounds – finally, one wheel on each side of the bar – but you are no longer touching the bar to your chest.

You are squatting double what you started with, but each time you are barely moving the weight as your knees crunch forward.

And those bicep curls have you jerking your back as you thrust spasmodically to get the weight up for each rep.

Yes, bad habits are being formed; habits that will likely last for many, many years.

As I mentioned above, I was a pretty bad offender when I first started weightlifting.

3 years into my training, I had definitely built muscle and increased my strength.

However, during this process, my form had gotten incredibly sloppy.

I was squatting 400 pounds – by jutting out my knees so far forward that they took most of the strain of the movement.

My form sucked, but my ego was feeling pretty damn pleased with itself.

Look at all the weight I’m lifting now, ma.

And no one else in the gym – not my workout partners, personal trainers, or anyone else – ever corrected me.

You see, people don’t typically take well to criticism, especially when it pertains to how they are lifting, so most people just don’t go there…

Thankfully, after 3 years, one guy finally decided to speak up.

His name was Ari, and he wasn’t a massive guy by any stretch of the word.

But he was strong, and he cared greatly about proper form…

So one day, as I was completing a set of knee-destroyers that kind of resembled squats, Ari decided to intervene.

“Hey, Chris, if you keep squatting like that you’re going to be in a wheelchair by the time you’re 30.”

Upon hearing this, my first instinct was indignation – who the hell was this guy to tell me my form sucks.

I can squat double what he squats!

But after that initial impulse died down, I realized that Ari was right…

My squat form was absolutely terrible.

And I had been noticing a nagging pain in my knees every single time after leg day!

So I decided to suck it up, and drop down my weight to whatever I could actually squat.

Ego be damned; I was going to finally start squatting properly!

As it turned out, I couldn’t squat nearly as much weight when I was actually doing it properly.

I literally had to cut the amount of weight that I was squatting by more than half in order to do it with proper form.

Yes, squatting with poor technique for those 3 years had actually kept my legs from getting stronger – and I certainly wasn’t nearly as strong as I had deluded myself into believing.

But it was the right move, and has allowed me to develop my squat properly over the years that followed.

And, over time, I applied this same process to the various other exercises where I was cheating.

I started benching properly, I controlled my penchant for hernia-inducing bicep curls.

It was tough at first to break those bad habits, but it has paid off 10-fold in terms of strength, proportionality, mobility, and joint health.

Why You Absolutely Need To Make Your Form A Priority

Not suitably moved by my tale of woe?

Are you still feeling content to continue benching the way you’ve been – cause you’re emotionally tied to the amount of weight you think you can lift?

Well, I haven’t given up on you yet; in fact, I’m determined to get through and snap you out of your complacency.

Here are the 3 biggest, most compelling reasons why if you continue to cheat on your form, you’re only cheating yourself…

1) You’re inviting all sorts of injuries

Well, your gym days may be sadly numbered if you don’t use proper form!

You see, when you have bad form – especially on big, compound movements like the bench press, squat, and deadlift – you are setting yourself up for an inevitable injury.

Instead of the weight being properly distributed throughout your back, quads, and hamstrings during your squats, your knees will quickly feel too much pressure and can easily become injured.

The same is true for that jerky, limited range bench press you’ve got going on over there – your elbows jutting out as a brace to stop the weight prematurely (yes, that is why they hurt sometimes).

So don’t grind down your joints needlessly.

2) You’ll get more out of each exercise

Not motivated by the avoidance of messed up knees and a hacked up lower back?

Well, perhaps you’ll be swayed by some of the positives of practicing proper form.

Simply put, if you start lifting properly you are going to get a lot more out of each exercise.

Yes, you’ll be able to bench press, deadlift, squat – and even bicep curl – more weight in the long run if you do this.

What’s more, for any given amount of weight that you’re lifting, you’ll get more out of it too.

You’ll develop a better, fuller chest from bench pressing properly, with a complete range of motion.

And that’s the whole point, right?

To get bigger, stronger, and look better.

Well, assuming that’s the case for you, then start making your form a priority and the results will follow.

3) You’ll have a consistent way to measure your progress

Systematically increasing the amount of weight you lift is the basis of any progression-oriented training plan.

However, it’s hard to get a clear sense of whether you’re doing more reps or lifting more weight if you don’t have a consistent benchmark to measure against.

Did you actually squat more than last week, or did you just cheat and not go down as far?

Was your bench actually better, or did your range of motion just decrease to accommodate the greater load?

When you have a standardized, consistent way of measuring each rep, logging your progress becomes a whole lot more meaningful.

Now I know what some of you are thinking…

You’ve seen a few people – either at the gym or in videos – who don’t seem like they’re doing the exercises with good form.

The thing is, these people are huge, muscular, and look like they know what they’re doing.

So if these muscular people are cheating – doing partial reps, half squats, limited ROM bench presses – doesn’t that mean that you can too?

These people are experienced weightlifters who know what they’re doing.

When experienced lifters do cheat curls, they aren’t exercising bad form, per se; instead, they’re performing a variation of the exercise.

However, when you cheat on your bicep curls – and aren’t one of these people with years of experience – you’ll be far more likely to injure yourself and not get much out of the exercise.

Basically the rule is this: if you have to wonder whether you should be doing one of these potential form variations on an exercise, then you probably shouldn’t be!

Stick to the basics, practice good, consistent form, and your gym journey will be a lot smoother and less injury-prone than if you let your ego get in the way.