The paleo diet has really taken off over the past few years, and has practically become the official diet of Crossfit and its numerous devotees.

Despite what many claim, there’s nothing magical about the paleo diet from a fat loss perspective; in the end, the paleo diet still works by limiting the types of foods you can eat and thus naturally creates a caloric deficit so you can lose weight.

What I do like about the paleo diet, though, is its emphasis on high-quality, whole foods without any room for heavily processed, nutrient-deficient junk food.

That said, the paleo diet is pretty limiting in terms of what you can eat and this makes it very difficult to find foods that are OK to eat on this type of diet – and that’s especially true when it comes to supplements.

Protein bars, for example, are considered by paleo advocates as processed food with a lot of ingredients that simply don’t comply with the paleo diet (refined sugars, flour, dairy, grains, sugar alcohols, etc.)

For example, my personal favorite protein bars are made by Quest, but Quest protein bars have several ingredients that don’t make the cut for the paleo diet:

So what is a follower of the paleo diet supposed to do when he or she wants to supplement their diet with protein when most protein bars and shakes are not allowed?

Bhu Foods makes a variety of speciality-diet-focused protein bars including vegan, paleo, and primal protein bars. These organic bars are grain-free, gluten-free, and soy-free, and they use natural protein sources such as egg white protein and pea protein.

I picked up the double dark chocolate chip flavor of the paleo protein bars in an attempt to mix up my usual supplementation with Quest protein bars and Optimum Nutrition protein powder.

Unwrapping the bar, the first thought that goes through my mind is:

Wow, this bar is small.

I’d say the Bhu Foods protein bar is about 3/4 the size of a Quest protein bar, which is definitely smaller in size than your average protein bar.

Here’s how the Bhu Foods bar compares to the Quest bar: 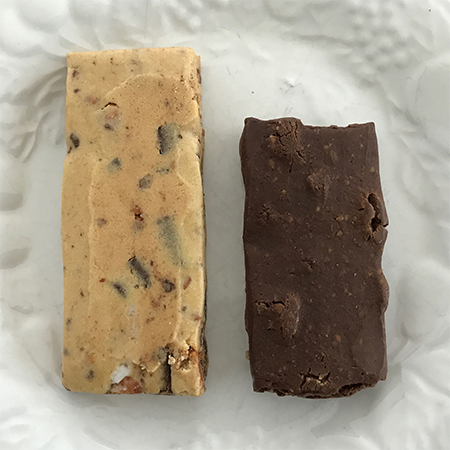 I was surprised by the small size considering the Bhu Foods bar has the same amount of calories (180) as the Quest bar. At the same time, there’s a weightiness to the Bhu Foods bar – it feels quite dense, which makes the caloric difference less surprising.

OK, time to take the first bite. Very good! I’m immediately satisfied by the taste and texture of this bar.

Yes, it is dense, but in a good way, like the way brownies can be dense but still delicious. In fact, the Bhu Foods paleo protein bar kind of resembles a dense, chewy, less cake-y brownie.

Speaking of brownies, there are actually chunks of brownie in this bar along with chocolate, chocolate chips, and sunflower seeds. 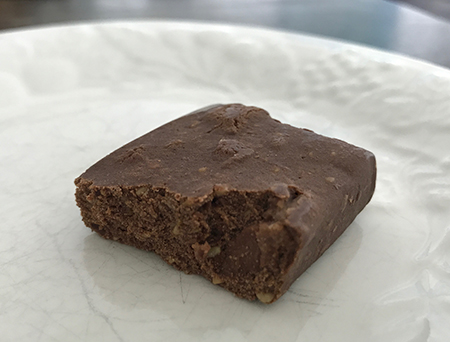 With these ingredients, it’s not a surprise that this bar has a pleasant, chocolatey taste to it. Don’t get me wrong, this doesn’t taste like a real chocolate brownie, but no protein bar does. Still, the chocolate flavor is easily detectable, not too sweet, and overall quite enjoyable.

I also thought the bar had somewhat of a nutty flavor to it, and I was surprised to check the ingredient list and not find any nuts on it. Go figure! I think what I was actually tasting were the sunflower seeds in the bar, listed as the third primary ingredient.

True to its promises, the ingredients list on the Bhu Foods paleo protein bars is full of simple, organic ingredients that should be paleo-approved (I’m not an authority on the paleo diet, but nothing in the list of ingredients raises any immediate red flags.)

Initially I was curious about whether or not monk fruit was OK on the paleo diet. Monk fruit is also known as luo han guo, a plant that grows in China and Thailand, and is used as a natural, low-calorie sweetener.

After doing further research, it does seem like monk fruit is fine by paleo standards, and is approved by Mark Sisson of Mark’s Daily Apple.

At only 14 grams of protein per bar, this is the primary area where the Bhu Foods bar falls short to me. 14 grams is a decent amount of protein but at 180 calories per bar, protein is only 31% of the total calories.

The primary macronutrient in this bar? Fat. Fat comprises 55% of the total calories in this bar which is quite a bit more than I like in my protein bars.

I don’t have a problem with fat, in general. Fat is a great source of energy and helps to produce numerous hormones in the body. And I especially don’t mind fat when it comes from clean ingredients like the sunflower seeds in this bar.

However, for me, the entire point of a protein bar is to help boost your protein intake for the day. That’s why the protein / calorie ratio is particularly important to me, because when I’m taking a protein supplement, my goal is to add a significant amount of protein to my diet without too many calories.

On the positive side, the Bhu Foods protein bar uses egg whites as its primary protein source. Egg protein is one of the highest-quality forms of protein with a biological value of 100. This means that it’s easily absorbed and utilized by the body.

Despite the relatively low amount of protein, I have to say I really enjoyed this paleo protein bar. It tastes great, the texture works, and I like knowing that the ingredients are a collection of mostly healthy, natural foods like egg whites and sunflower seeds.

The Bhu Foods paleo protein bar works best for me when I think of it as a tasty, healthy, paleo-friendly snack – which also happens to have a decent amount of protein. But if you’re looking for a bar with the highest protein content, you should consider other options.