The Truth About Lower Back Pain From Deadlifts 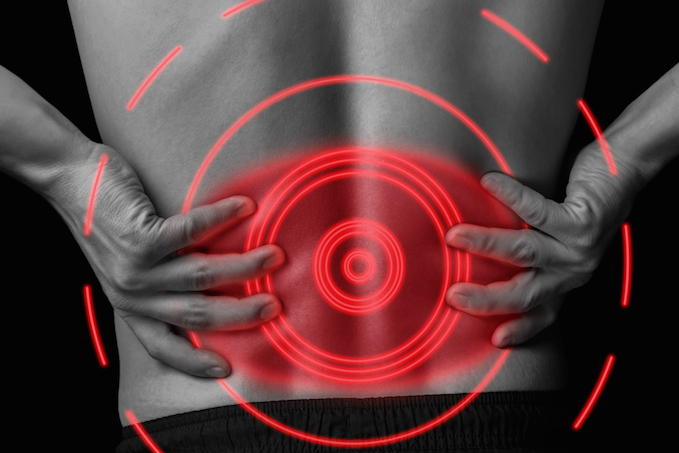 The poor deadlift has a bad rap…

In my opinion, it is a core exercise – along with both the squat and bench press – that should be included in pretty much every strength training routine.

It is truly a full body movement, working so many more muscle groups in unison than most other exercises that you’ll see people doing.

Plus, when done correctly, it will help to strengthen your posterior chain, and has been shown time and time again to be one of the most effective exercises in this respect.

However, the deadlift is also known in many gym circles to be a savage lower back destroyer!

And for this reason, many people will never even attempt doing it at all.

I don’t want to destroy my lower back, they’ll say – and, really, you can’t exactly blame them…

You don’t have to look very far to find someone that has messed up their lower back deadlifting.

In fact, I fell into this camp more years than I’d like to admit…

Deadlifting And Your Lower Back

You see, for many people, having a sore lower back after deadlifting just kind of goes with the territory.

Indeed, if you do a Google search for “lower back pain deadlifts”, you’ll find lots of people talking about this very topic.

The problem is that many of them are further perpetuating the myth that your lower back is somehow supposed to hurt after deadlifting.

Take a look at this thread on Bodybuilding.com, entitled “Lower back sore after deadlifts?”

You’ll notice that many of the people who chime in seem to think it’s normal to have lower back soreness after deadlifting.

In fact, the very first comment tries to reassure the initial poster, claiming: “Yes very normal, I’m sometimes sore for 2 days after I do deadlifts.”

Let me make this unequivocally clear: your lower back should not be sore for days after deadlifting!

It should not be sore for hours after deadlifting.

And it should definitely not be sore while you’re deadlifting.

The truth is that if it is sore, you are simply doing it wrong. Much like I used to do.

Why Some People Get Lower Back Soreness From Deadlifting

When it comes down to it, the only reason that your lower back should hurt from deadlifting is if you are making it take on too much of the weight.

For me, the big fix was when I stopped treating deadlifting as a ‘pulling exercise’, and instead started seeing it as a ‘pushing exercise’.

You see, my deadlifting routine used to go something like this. I would get to the gym, put some weight on the bar, and then get myself into position.

However, instead of starting the movement by driving with my legs and engaging my glutes, I would forcefully lift the weight up using my upper body, putting a tremendous amount of strain on my lower back.

My back would get pretty damn sore, I’ll tell you that much.

But I thought this was normal, so I kept it up year after year.

It’s a back exercise, right? My back is probably supposed to hurt.

And then, every so often, I would really hurt my back during a deadlift set.

A sharp, searing pain would radiate through my lower back, forcing me to abruptly put down the weight and limp out of the gym.

Whenever this happened, I would typically be in really bad pain for a few days, which would gradually subside over the course of a week.

This would understandably scare me away from deadlifting for awhile, as similar experiences have scared away countless people from this exercise over the years.

How Deadlifting Should Feel

I’ll put it plainly: when you are deadlifting, your lower back shouldn’t feel sore. It should feel completely fine; that is, you shouldn’t really be feeling it at all.

At most, it may have a slight post-workout tightness – not anything more than that, and certainly not pain.

If you are experiencing lower back pain, I would advise checking out my article that goes over the most common deadlift mistakes.

Pay particular attention to the points about rounding your lower back (mistake #1) and pushing vs pulling (mistake #2). 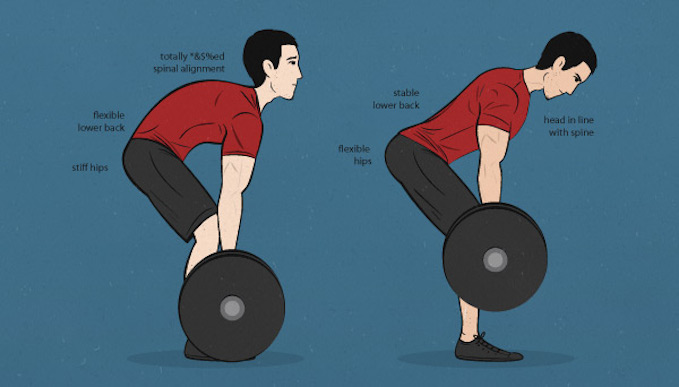 If you look like the guy on the left when deadlifting, you are going to get lower back pain at some point – and if you continue lifting like that, you will almost certainly experience some of the extremely painful episodes that I needlessly endured for years.

On the other hand, if you deadlift like the guy on the right – and really pay attention to keeping your back straight throughout the exercise – your lower back should be pain free.

In fact, my partner Justin Fauci, a paragon of good deadlifting form, has never hurt his back on this exercise. Not once. Over more than a decade.

So, to sum it all up, please don’t let the fear of back pain scare you away from deadlifting. Practice proper form, and you should be absolutely fine.