Is Diet Soda Bad For You? 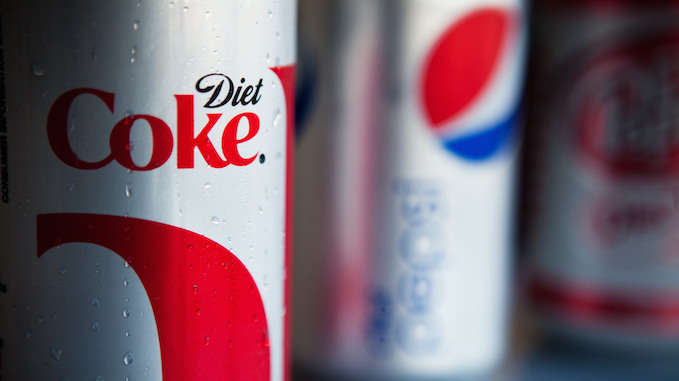 Let me start by saying that I’m a big fan of diet soda.

I have been drinking the stuff for years, and if I didn’t stop myself would probably be drinking it all day long.

I mean, it doesn’t have any calories, tastes good, and is a lot more interesting than plain water.

Plus, it provides a nice caffeine kick too.

However, despite all of these great things, diet soda has come under attack in recent years for being unhealthy.

People claim that it contains artificial sweeteners that do terrible things to you.

Others believe that it actually causes weight gain and diabetes – exactly the type of problems that it is supposed to help prevent!

So, for the benefit of all diet soda lovers out there, I wanted to examine some of these claims properly.

Do they have any merit, or are people just needlessly hating on these zero calorie beverages?

One of the recent claims against diet soda is that it is actually linked to diabetes.

You see, the incidence of type 2 diabetes has grown immensely over the last several decades, now impacting over 300 million people around the world.

Given this, one would think that diet soda would be perfect for people suffering from diabetes – or who wanted to avoid developing it in the first place!

Well, not according to several recent studies that specifically link diet soda consumption with diabetes.

From these studies, it would indeed seem that the association between type 2 diabetes and diet soda is surprisingly very strong.

Poor diets and limited exercise are generally what get the blame for the obesity epidemic.

And, like diabetes, you would expect diet soda to be good for losing weight, since it doesn’t contain any of those empty sugar calories.

However, this isn’t as clear as you might think.

In fact, various separate studies in the last few years – such as this one, this one, and this one have concluded that there is a strong link between drinking diet soda and gaining weight.

In addition to these newfound linkages to diabetes and obesity, diet soda has also come under fire for the various unnatural sweeteners that it contains.

Yup, the internet is full of articles blaming these artificial sweeteners for cancer, messing with your hormones, your gut, your appetite, and more.

So much so, in fact, that both Coke and Pepsi have recently come out with new 50% sugar sudo-diet drinks to cater to the growing fear of these unnatural chemicals.

So Should I Stop Drinking Diet Soda?

Not so fast, my friend. I wouldn’t draw that conclusion just yet…

In fact, you’re probably feeling a bit confused about the studies I mentioned above.

Well, while studies can sometimes seem completely authoritative, it is very important that we don’t take them at face value.

In all of the studies I mentioned, linking diet soda consumption to obesity and diabetes, it is important to note that the relationship was always determined on an associative basis, rather than a causal one.

This means that although it seems clear that diet soda consumption is associated with both obesity and diabetes, this doesn’t mean that it causes either of them, or in any way contributes to their development.

Here is a more plausible explanation:

People that are overweight are looking to cut back on their calories. So they start drinking diet soda, instead of regular soda, but still maintain a caloric surplus due to other bad dietary habits and a lack of exercise.

As a result, they don’t lose weight, and stay obese while drinking diet soda. Bingo, there is your associative link.

Likewise, people who are diagnosed with type 2 diabetes often need to make some pretty drastic lifestyle changes. One of the easier ones to make is switching to diet soda. Again, we have an associative link.

Here is a quote from the well-respected nutrition researcher Alan Aragon that perfectly sums this up:

“I personally could not find any research showing a causal relationship between artificially sweetened soft drinks and weight gain, let alone research indicating a thyroid-mediated mechanism for this phenomenon. Among the research that does exist, the majority of studies lasting beyond the acute phase have demonstrated the superior effectiveness of artificially sweetened beverages to sugar-sweetened ones for weight loss. Therefore, the claim that diet soft drinks cause weight gain is nothing but a false alarm.”

But What About The Sweeteners?

OK, so if we accept that it is highly unlikely that there is a causal relationship between diet soda consumption and diabetes/obesity, we still have to address the safety of the sweeteners themselves.

Sucralose, the sweetener found in Coke Zero, is fairly new, only coming to market in the mid 2000s.

And while some studies found that ingesting large quantities of Sucralose can produce adverse effects, numerous other studies show that it is completely safe when taken in normal amounts – far more than one would ever normally consume.

Further, the majority of Sucralose isn’t actually absorbed by the body. In fact, less than 27% is absorbed, making it even more unlikely that you’d ever ingest quantities that came close to being toxic.

Aspartame, on the other hand, is a very well-established sweetener, and is approved for safe consumption in more than 90 countries.

There have been very extensive studies conducted on Aspartame, and the results are mixed.

For instance, a 2013 examination of multiple studies concluded that Aspartame doesn’t increase the risk of cancer, however it may cause headaches in some people, and it can be fatal for people who have specific allergies, such as those suffering from phenylketonuria.

In the end, I think it’s fair to say that diet soda is hardly the worst thing for you to be drinking.

As for the sweeteners, that is admittedly more of a risk, albeit a small one. Aspartame has been thoroughly studied, and is safe as long as you aren’t consuming too much of it. Sucralose is newer, but so far there aren’t any studies that would demonstrate that moderate consumption is dangerous.

That being said, we simply don’t know – so it’s probably best not to completely subsist off of the stuff!

Instead, get into the habit of drinking water as your main beverage, and limit yourself to 1 or 2 diet sodas each day.

Finally, some people find that drinking diet soda can actually increase their appetite and make them more likely to cheat with their diets.

This is largely anecdotal, but if you do find yourself craving sweets or bad foods when you drink diet soda, then make the sensible choice and limit how much you drink.

No need to make things harder on yourself; after all, diet soda is supposed to help with sweet cravings, not lead you to eat more sweets!