How To Fix Your Slow Metabolism Naturally 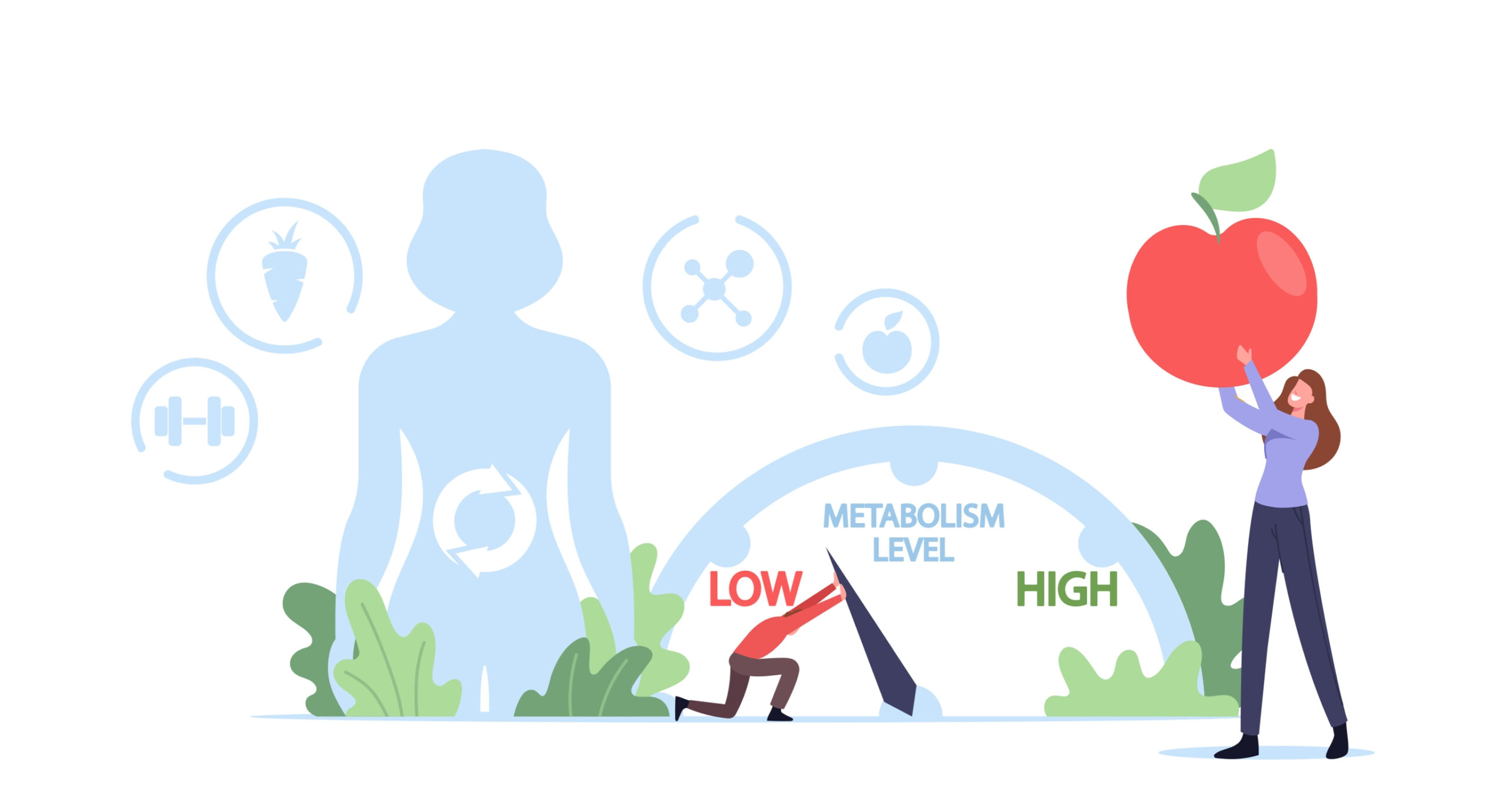 Do you suffer from a slow metabolism?

If so, you are certainly not alone…

In fact, in my experience, the speed of one’s metabolism is a massively underrated factor when it comes to losing (or gaining) weight.

I’ll work with clients that are eating only 1200 calories per day, and still have body fat levels that they’re unhappy with.

How could this be?

There are obviously lots of variables (exercise, NEAT variation), but metabolism is a pivotal factor that can account for a lot of the frustration that many people face.

The solution is simple (at least in theory) – you want your metabolism to be running at a healthy, efficient rate.

This article will go through some of the most effective ways of increasing your metabolism, so that you’ll be able to lose fat without cutting calories to ridiculous levels.

What Does ‘Metabolism’ Really Mean?

Technically speaking, there are 2 different types of metabolism.

Constructive metabolism (also known as anabolism), which is when carbohydrates, proteins and fat are synthesized to create tissue and store energy.

Destructive metabolism (also known as catabolism), which is the breakdown of muscle, fat, or substances in your body.

So, basically, your metabolism is what allows your body to build up and break down various substances, and create energy for your body to use.

What Is The Difference Between A Fast & Slow Metabolism?

Based on all of this, it is the speed of your metabolism that will largely govern how efficiently your body uses energy.

This is commonly known as your metabolic rate.

We have spoken about Basel Metabolic Rate (BMR) before, which you can just think of as the number of calories that your body needs to operate properly (respiration, functioning of vital organs, etc).

Therefore it follows that if you have a faster metabolism, your body requires more energy in order to maintain itself.

Conversely, if you have a slower metabolism, your body doesn’t require as much energy to sustain itself at a base level.

One thing to note here is that, in a certain sense, a slower metabolism is actually more efficient than a faster metabolism. Plainly speaking, your body is able to survive on less.

However, if you’re out to build a lean, muscular body, then you want to make sure that your metabolism is suitably revved up.

For example, let’s look at the case of the person who has a TDEE of 1200 calories.

In order to stimulate fat lose, he would need to eat at a caloric deficit; however, with a paltry 1200 calorie TDEE, it isn’t tenable to reduce calories that much further.

This is especially true if he wants to build muscle as well (as many people do).

At the end of the day, the slower your metabolism is, the less food you’ll need to consume and the more you’ll need to exercise if you want to stimulate weight loss.

When you have a faster metabolism, the opposite is true: you won’t need to cut calories or exercise nearly as much in order to properly induce fat loss.

What Causes A Slow Metabolism?

This is the part that is shocking to many people…

Generally speaking, you tend to think of people who are overweight or obese as having the slowest metabolisms, but this isn’t always the case.

In fact, the opposite is often true: it is the people who eat at extreme calorie deficits who gradually grind their metabolisms down to a sluggish pace.

And while this approach will work in the short-term, in the medium-term it can be incredibly counter-productive.

This is because your body is constantly trying to adapt to the amount of energy that it has available, with the goal of maintaining a constant weight (known as homeostasis).

So, when you significantly restrict calories, your metabolism will tend to slow down to keep everything in balance, resulting in your weight loss progress ultimately flatlining.

If it sounds like your body is working against you here, it’s cause it is – but remember that these biological mechanisms evolved as a way to maximize your chances of survival, not to keep you at aesthetically pleasing low levels of body fat.

Anyway, when this happens, what do you think most people do?

They decrease calories even more!

Eventually, this leads to eating an absurdly low amount of calories with a massively reduced metabolic rate that keeps down regulating as energy input decreases.

What’s even worse is that if you then decide to say “to hell with this” and suddenly start consuming a lot of calories again, your reduced metabolism won’t be able to handle the sudden influx, resulting in significant fat storage.

This unfortunate, often self-perpetuating, state is known as ‘metabolic damage’, and is a very bad thing indeed.

In fact, if I take on a client that fits this pattern, one of the top initial priorities is to systematically repair their metabolism so that they can start making consistent progress.

Let’s take a look at some of the ways that this can be done.

How To Fix Your Slow Metabolism

There are various different ways that one can adjust their metabolism, but here are some of the most important ones that you should focus on first.

When you’re looking to reset your metabolism to healthy levels, you’ll often want to practice ‘reverse dieting’ before you start eating at a caloric deficit.

This is the approach that I have used very successfully with many clients, even though it can initially seem counterintuitive.

I’ve touched on this in my article on Leptin, and it is also why taking a diet break can prove effective.

You see, reverse dieting involves slowly increasing the number of calories that you eat each day.

By slowly increasing calories, your metabolism will gradually increase too, thereby reversing much of the metabolic damage.

This usually means increasing daily calories by about 100-200 per week, until the client is at a healthier TDEE.

The goal here is to steadily improve metabolic rate, without putting on additional body fat (which happens if you increase calories too quickly).

This is one of the most effective ways to reverse the effects of metabolic damage naturally.

For a more comprehensive look at reverse dieting, I’d suggest checking out my article here.

Yes, strength training is an integral part of kicking a sluggish metabolism back into gear.

There are actually 2 reasons for this.

In the short-term, weight training helps to increase the amount of calories that you burn after your workouts (for a period of time).

In the longer-term, the more muscle you have, the more calories that you burn each day, helping to increase your metabolic rate.

Protein is an essential component of building muscle – and since increased muscle mass will help to stimulate a faster metabolism, getting adequate protein is an absolute must.

Eat The Right Amount Of Fat

Now I am not going to go into why eating fat doesn’t make you fat (that is for a different article).

Suffice to say, fat is an important macronutrient, but if your levels are either too high or too low, you are likely to run into problems.

In the context of reversing metabolic damage, keeping your fat at a moderate level will help to ensure that your hormones are properly in balance.

This is very important, since hormones like testosterone are correlated to fat intake – and testosterone has been demonstrated to have a positive impact on your metabolic rate.

A Cornerstone Of Your Sucesss

Now I am going to go as far as to say that your metabolism is a vital cornerstone of your success if you are going to lose fat properly.

So, if you suffer from a slow metabolism, I would strongly recommend fixing it before you start worrying about trying to drop weight on the scale.

Even if you are able to lose a few pounds in the short-term by essentially starving yourself, you really aren’t doing yourself any favors.

This isn’t sustainable, and will ultimately lead to a lot of frustration.

Instead, by improving your metabolism first, you’ll ultimately be able to lose fat in a way that is a lot less painful, and far more sustainable.

You’ll be able to eat more calories AND still lose fat at the same time.

So don’t get ahead of yourself in your eagerness to start shedding pounds and drastically cut calories. Make sure that your system is in good working order first.