How Not To Be An Asshole At The Gym 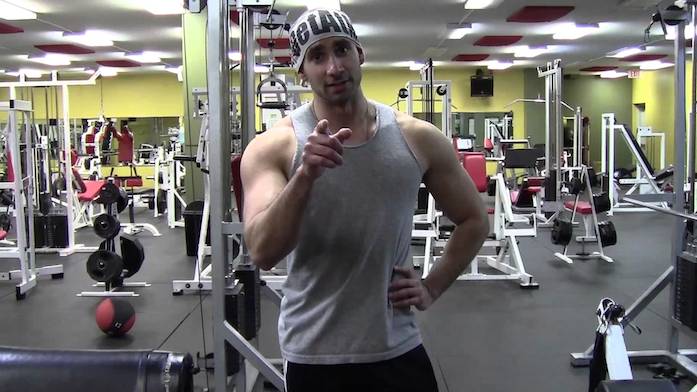 Like it or not, when you work out at the gym, there are going to be other people there too.

I know, in a perfect world you would have your own gym – where you would never have to wait for a piece of equipment, or ever see that creepy old dude that wears short shorts and smells kind of feral.

But this isn’t a perfect world.

If you’re gonna work out at a gym, you need to accept that there are a set of unspoken rules, a code of conduct for acceptable behavior.

Unfortunately, no one tells you these rules; you have to figure them out for yourself, usually after breaking a few and getting some nasty stares (or worse).

Fear not – I am here to lay down the law of the land. These rules have been passed down through the hushed whispers of 1000s of gym-goers before you, and now you will know them too.

Read the these rules, learn them, love them, and live by them – and you may just make the world a better place.

Well, probably not, but at least you won’t piss off that massive guy by the squat rack next time.

If you sweat on a machine, wipe down that machine. 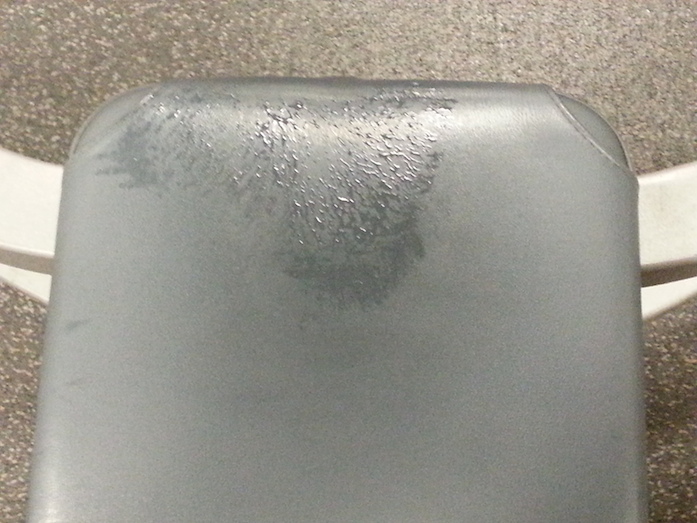 Let’s start off with an easy one.

If you finish your set of of lying tricep extensions and the bench is visibly wet from your sweat, don’t be that dick that tries to skirt away unnoticed.

Look, no one wants to lie a puddle of your sweat.

So this rule is simple. When this happens, go get a towel (or one of those wet-wipe things, if your gym has them) and wipe down your filth from the equipment.

And no, this doesn’t mean that you have to be that person who neatly lays down his towel on each piece of equipment before he uses it to preemptively soak up every last droplet of sweat. Not that there’s anything wrong with being so exceedingly conscientious, but it isn’t required to not be an asshole.

You can only lay claim to one piece of equipment at a time. 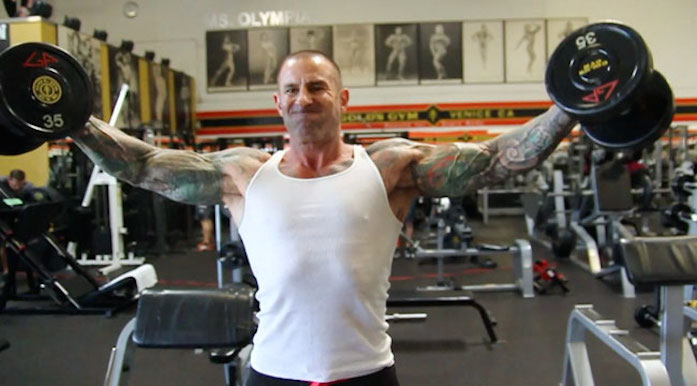 Now I know that this one is going to piss some of you off, so turn away now if this offends your super-setting sensibilities.

If you want to avoid being an asshole, you will only occupy one piece of equipment at one time.

This means that if you’re on the incline bench, you can’t also hold claim to the cable machine.

If you’re doing bicep curls, you can’t also have your invisible friend holding the squat rack for you.

This isn’t to say that you might not want to do this. I know, it can be effective to pair complementary body parts, and you get your workout done faster…

But that doesn’t change the fact that doing it makes you an asshole!

Other people have to use that equipment too – and there is nothing more infuriating than waiting for a piece of equipment that someone has ‘claimed’ when they’re not even using it.

There are, however, some important exceptions to this rule, so listen closely.

1) If you have a workout partner, you may superset between 2 different machines, as long as you are efficient about it. In this event, each person only has claim to one piece of equipment at a time, so the integrity of the rules remains intact.

2) If there is no one (or hardly anyone) working out, you may superset – but must be ready to relinquish this privilege at the drop of a hat.

If people can smell you several feet away, that is unacceptable. 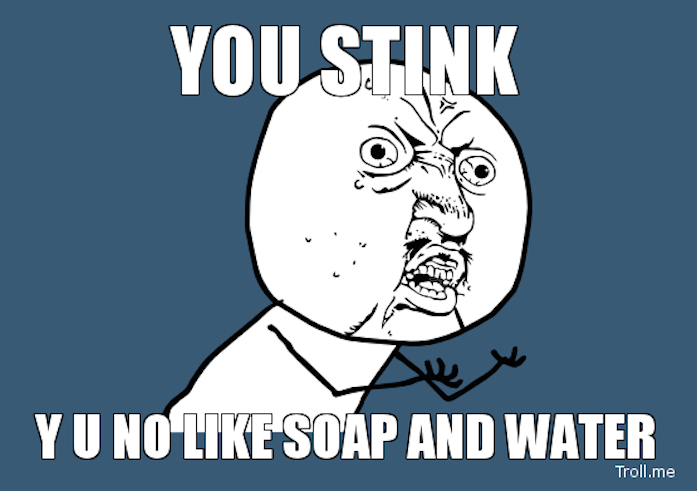 I know what you’re thinking: it’s a gym, people sweat, which means that people will smell.

That is all well and good, but odoriferousness has its limits – even at the gym!

So how much is too much, when it comes to your workout smell?

It’s actually quite simple – if people can smell you from several feet away, then you smell too much.

This is thankfully quite a rare occurrence, but occasionally there is a person that didn’t seem to get the memo.

Look, no one should have to gag while they’re working out because you happen to not like to change your clothes every day.

Compliance with this rule is actually very easy. Shower regularly and wear clean clothes to the gym each time you work out.

Also, don’t try to cover up your funk with cologne. That just makes the offense much, much worse – and trust me, you aren’t fooling anyone!

If you want to talk on the phone, go somewhere else. 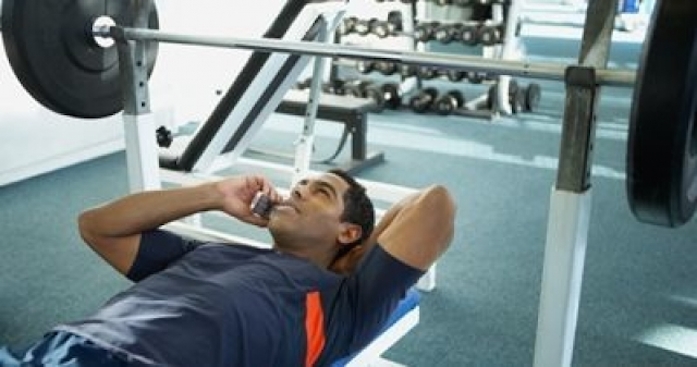 There are many places where you can chat to your heart’s content.

The gym, however, is not one of them.

If you need to take a call, go to the locker room – or at the very least, vacate the piece of equipment that you are currently using.

No one wants to hear about your weekend plans while they are trying to focus on their lifts.

And absolutely no one wants to wait for a piece of equipment that you’re not even using while you chat up a storm.

It is important to clarify, though, that in 2014 taking your phone to the gym is perfectly acceptable.

When you’re finished with your weights, put them back. 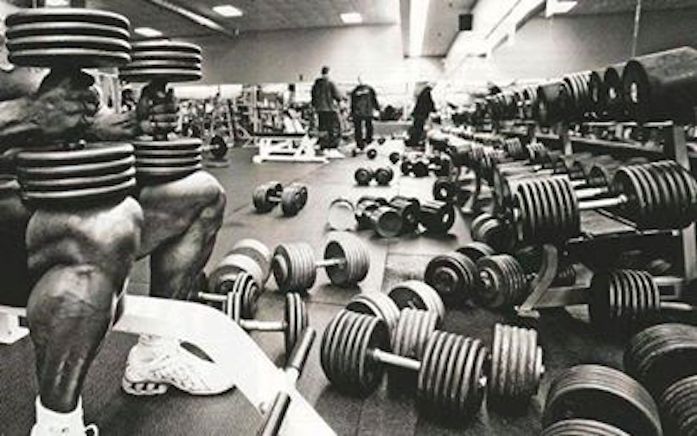 I have saved perhaps the most egregious offense for last.

Let’s get one thing straight: the gym is not your personal playpen.

When you were a kid, it may have been acceptable to leave your toys on the floor in your room after you were finished playing with them.

Hell, for all I know, you may still do this at home – and, really, it’s none of my damn business if you choose to live like a man-child.

But when you are in a communal place like the gym, you have to put on your big boy pants and start acting like an adult.

This means when you’re finished with the bench press, you take ALL of the plates off and put them back.

Likewise, when you’re done with that set of dumbbells, you put them back in the rack where you found them.

Despite what some people seem to think, weights never just magically return to their proper resting spot.

Somebody always has to put them back – be it you, the person using the machine after you, or the poor cleaner who has to risk a pulled back cleaning up after the daily warzone left behind.

After reading through this article, you should now have a good idea about what gym behavior is considered acceptable – and what makes you fall into the asshole category.

Frankly, most of this stuff should be pretty obvious, and line in with basic standards of social decency.

However, for whatever reason, some people didn’t seem to get the memo, so feel free to print out this list and stick it up at your gym if some of its members need a gentle reminder.

And if you are currently doing any of the things I mentioned, you would be wise to amend your errant behavior.

Just like Santa Claus, the omniscient gods of the gym know who is naughty and nice, and may well reward your misbehavior with an untimely shoulder injury when you least expect it…