How Much Protein Can You Absorb In One Sitting? 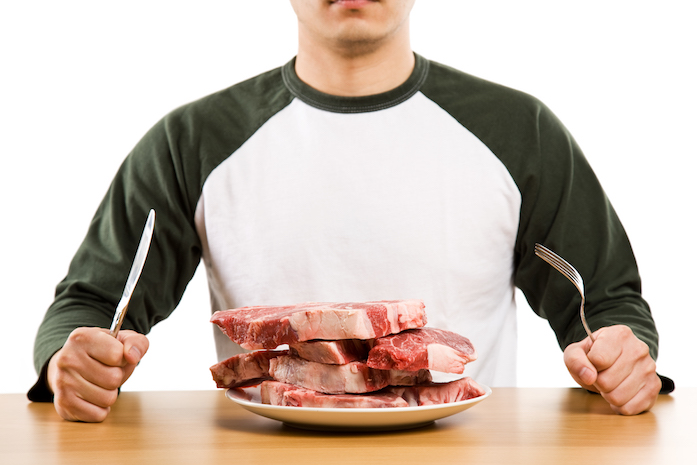 Is there a maximum amount of protein you can eat in one meal before it gets “wasted”?

There are a whole lot of myths in the fitness industry, and some of the most pervasive myths revolve around protein intake – how much protein is optimal for muscle growth, which protein sources are highest in quality, how often protein should be consumed, etc.

One of these myths is the idea that your body can only consume 30 grams of protein in one sitting, and that anything beyond that level is just wasted and left unutilized.

According to this kind of old-school bodybuilder advice, you need to consume protein every 2-3 hours in order to maximize protein synthesis, and that if you DON’T eat your protein with such frequency, then your muscles will be left in a state of slow decay until you manage to salvage what’s left of them with another quick protein injection.

This is why the more obsessive types would set their alarms for 3AM every night just so that they could wake up, stumble to the kitchen in a fog, and throw down a thick, goopy protein shake in an attempt to save their protein-starved muscles from shriveling away overnight.

But is there actually any truth to this idea, that you have to consume protein every 2-3 hours to stave off muscle loss?

And where did this myth come from, anyway?

The Boire Study On Fast Vs. Slow Proteins

From what I can gather, it seems like this myth started up soon after the Boire study on protein absorption was published, titled “Slow and fast dietary proteins differently modulate postprandial protein accretion.”

The Boire study examined the speed of absorption of two different types of protein – specifically, whey and casein.

The results of the Boire study showed that 30 grams of whey protein was fully digested by the body in about 3-4 hours, whereas casein protein took over 7 hours.

In the following chart, you can see that whey protein quickly spikes blood levels of amino acids, and then quickly returns to baseline levels within 3-4 hours. Casein, on the other hand, has a less dramatic entrance into the bloodstream, but delivers a longer-lasting, steady supply of amino acids. 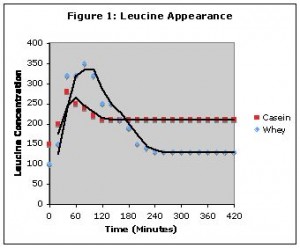 It’s very important to note that under this study’s conditions, the subjects were given the protein after a morning fast and the protein was consumed by itself without any other food. If the protein had been administered with whole foods, absorption rates would have slowed down considerably.

In any case, somehow the bodybuilding community interpreted the results of this study to mean that it was necessary to consume protein every 3 hours or so to maintain protein synthesis and prevent the body from going “catabolic”, or in other words, breaking down muscle tissue.

To be honest, I’m not exactly sure how this logical jump would have occurred, because it doesn’t make much sense, but as I know very well by now, the biggest fitness myths are usually started by the stubborn people who shout the loudest – not the people who take their time to read and understand the research.

Based on this study, whey’s absorption rates were about 8-10 grams per hour, which is why 30 grams of whey was absorbed in 3-4 hours. But if the subjects had taken DOUBLE the protein, then it would have taken longer to absorb the whey, likely 6-8 hours.

The casein results alone show that even 30 grams of protein has the potential to be absorbed over longer periods of time – without ANY food – so I’m not really certain when the 2-3 hour panic set in, but I do believe it was from some false, knee-jerk reaction to this study.

So What’s The Truth?

The human body is smart and it’s extremely adaptable. The fact of the matter is that the body will take its time to fully digest and absorb all the nutrients in any given meal.

When you eat a meal, the food is broken down in your stomach via acids and enzymes, and then proceeds to make its way into the small intestine. The body then directly absorbs the nutrients through the walls of the small intestine into the bloodstream.

Now getting back to protein, if you’re consuming a large amount of protein in a single meal, all this means is that it will take a longer time for the body to fully digest the meal and utilize all the protein.

This concept is supported by several studies.

In one study conducted on women, a group of subjects was given over 54 grams of protein in a single meal, and the other group was given the same amount of protein but spread out over 4 smaller meals. After 14 days of the experiment, the results showed NO differences between the two groups.

In the study “Intermittent fasting does not affect whole-body glucose, lipid, or protein metabolism”, Soeters and colleagues compared the diets of two groups: one which was doing a 20 hour fast every other day and consuming all calories within a 4 hour window, and another following a more standard diet with multiple meals per day.

Even though the intermittent fasting group consumed all of their protein (80-100 grams) within a 4 hour window, the results of the study showed that there was no difference in the preservation of fat-free mass between the groups.

Furthermore, if we just take a look at anecdotal evidence from our Caliber Fitness online personal training clients, we see the same conclusion being played out over and over again.

Despite the fact that many of our training clients follow some sort of intermittent fasting protocol and consume upwards of 100 grams of protein in a single meal, this has never been shown to impede muscle growth results whatsoever.

Here’s the TL;DR version of this article:

The biggest difference between large and small portions effectively comes down to how long it takes to digest the meal, and that’s it.

So you can safely file away this fear of eating too much protein in a single meal, and get back to the fundamentals of training and nutrition that actually matter to get results.