How Many Protein Shakes A Day Should You Drink? 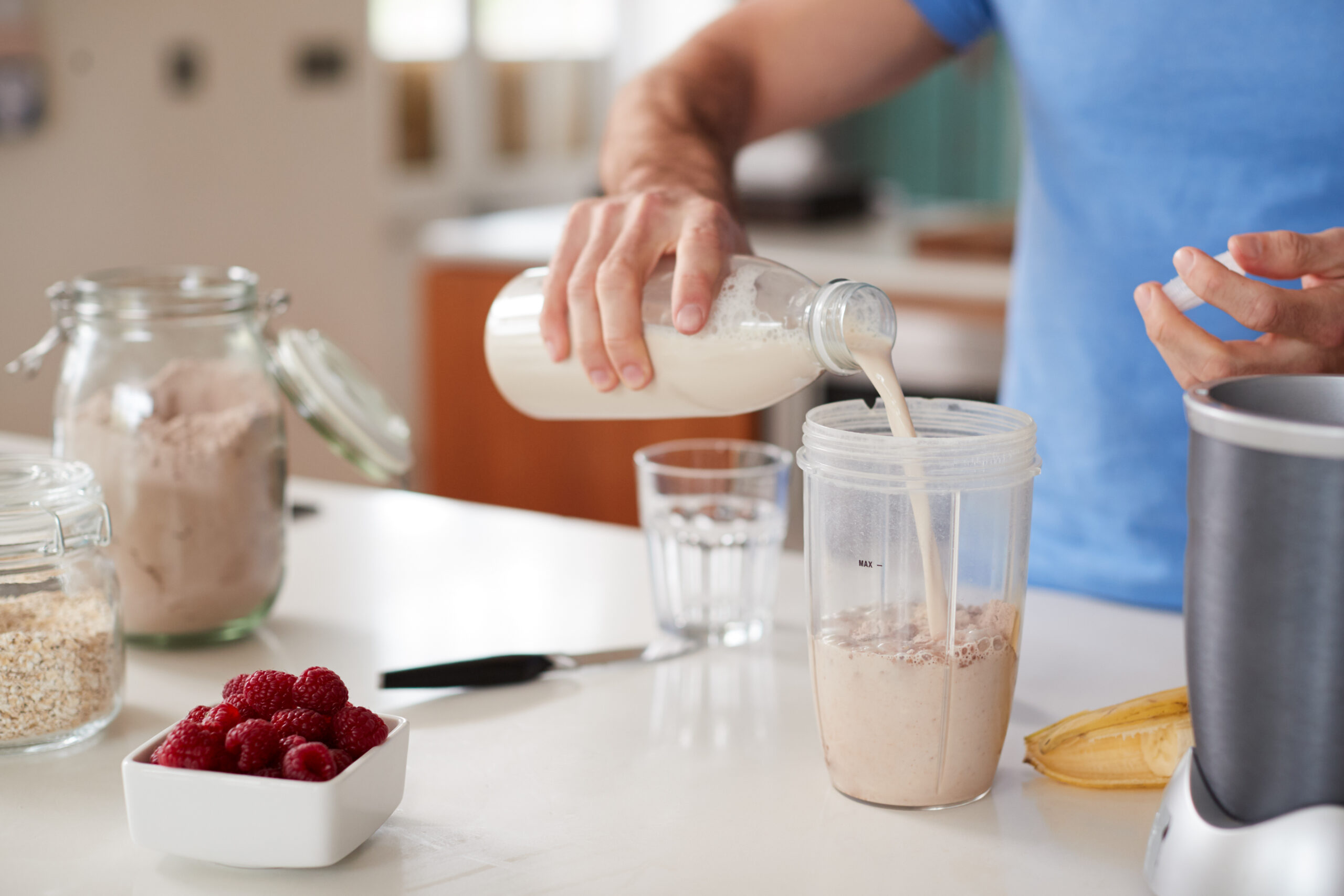 What used to be a mainstay of only the most serious weight lifters and meatheads, the humble protein shake is now nearly as ubiquitous as soda.

You’ll find them sold in drug stores, convenience stores – and even in vending machines!

And for good reason, since these days pretty much anyone who works out feels that they need to constantly be guzzling these things down.

In fact, many people who don’t even exercise now seem convinced that they, too, should be drinking these potent muscle-elixirs.

Even with all of the conflicting fitness advice out there, most of the experts are able to agree on one thing:

We all need to be getting more protein.

Yup, protein shakes have benefited greatly from this societal drive towards higher protein diets (the average American male only eats 102 grams of protein per day).

OK, that’s fine Chris, but how many shakes should I drink?

If I had a nickel for every time i’ve heard that, I’d be a rich man…

Whenever I’m asked that question, I always respond in exactly the same way:

“Well, what is your diet like at the moment?”

I’ll generally get a look of confusion, tinged with annoyance, as if I’m somehow being purposefully evasive and not spilling the beans.

But the truth is that the number of protein shakes you should drink – if any – has everything to do with what’s going on with the rest of your diet.

Damn it Chris, just tell me the magic number of shakes to drink so I can stop reading this stupid article and get back to drinking shakes.

Sure thing. You should be drinking anywhere from 0 to 8 shakes per day.

Satisfied? I thought not.

I’m sorry, I wish I could tell you “drink 4 shakes a day and you’ll be jacked”, but that would be a complete and utter lie.

So, to help you figure out how many shakes you should actually be drinking, we have to backtrack a little bit…

We have to first figure out how much protein you should be eating per day, how much protein you’re currently eating, how many grams of protein are in each shake (varies wildly by brand) – and then, finally, we can look at how protein shakes may be able to help bridge any potential gaps.

How much protein should you be eating?

This could be a subject for an entire article, but for now we’ll keep it simple.

The general rule is that you should be eating roughly 1 gram of protein each day for every pound of body weight.

Let’s look at an example.

Ben is trying to improve his physique and put on some muscle. He currently weighs 180 pounds.

This means that Ben should try to eat at least 180 grams of protein, on average, each day.

Yes, some people base this number off of lean body mass (LBM), while others say that you need to be eating more than this – but for the purposes of this article, we’re going to work off of the 1 gram per pound assumption.

The bottom line is at the bare minimum you should be consuming that amount of protein each day.

How much protein are you getting at the moment?

Now most people won’t have a clue how much protein they eat each day.

It could be 100 grams, it could be 300 grams, or it could vary considerably from day to day.

The answer to this question, however, will greatly determine if you’re eating too little protein, too much protein, or a sufficient quantity of protein.

But how do you figure this out?

Well, the best way to get an accurate answer is to log how much you’re eating for a few days.

You can do this using various diet tracking websites, such as MyFitnessPal or FatSecret (they’re both free to sign up).

After you’ve created your free account, you should go through and enter what you ate today, and then do the same thing over the course of the next 3-4 days.

These sites already have most common foods in their databases, so logging what you ate should only take a couple minutes.

Now, after logging for a few days, you should have a rough idea of how much protein you’re eating.

If that number, in grams, is quite a bit more than your body weight (say, more than 50% higher), then you may actually be eating too much protein.

If this is the case, you definitely don’t need to add any additional protein shakes to your diet, and may want to consider decreasing the amount of protein you’re eating, or cutting out some of the protein shakes you’re already drinking.

However, if that number is less than the amount of protein you should be eating (based on the 1 gram/1 lbs body weight), then you need to fill that gap – and protein shakes can be useful for doing just that.

Getting back to our example, Ben found that he was only eating between 100-140 grams of protein per day – meaning that he needs to eat at least 40-80 grams of additional protein each day.

How many grams of protein are in each shake?

As I mentioned above, the amount of protein in each shake can vary considerably.

Ready-to-drink shakes that you buy from the store can have relatively small amounts of protein, and are filled with lots of fats and carbs as the bulk of their calories (I’m looking at you, Muscle Milk).

Protein shakes that you mix at home will often have more protein in each serving.

On average, i’d say that you’re looking at roughly 20 grams of protein in each serving.

If you don’t already have a brand that you like, I’d recommend going with Optimum Nutrition.

Their shakes are affordable, taste great, easy-to-mix, and don’t have a lot of other crap in them.

The number of protein shakes you should drink each day.

Now that we have all the information, we can finally answer the question properly – at least for Ben and his specific protein requirements.

Remember, Ben weighs 180 pounds, and is currently consuming about 100-140 grams of protein per day.

That means that if he is to get at least 180 pounds of protein per day, he should consider supplementing with 2-3 servings of a shake like Optimum Nutrition.

This would have him consuming an additional 40-60 grams of protein each day, giving him sufficient protein for building a strong, healthy body.

But here’s the most important part that I left out…

Ben could also get that additional 40-60 grams of protein from eating more regular foods!

He could add some chicken, beef, turkey, eggs whites, cottage cheese, etc, into his diet each day, just as readily as he could add those 2-3 protein shakes.

At that point, it’s all a matter of personal preference.

Which leads me to the real reason you should consider having protein shakes in your diet.

They’re a convenient and cheap source of protein.

You can bring a shake to work to have as an afternoon snack.

You can chug a shake quickly after the gym and get on with your day.

But don’t be fooled by the marketing – there is nothing magical about protein shakes that is going to get you big and ripped.

They don’t have steroid-like properties, and you probably don’t need to drink them like it’s your job.

They’re just another way to get protein. Nothing more and nothing less.