Getting Over Grilled Chicken & Broccoli 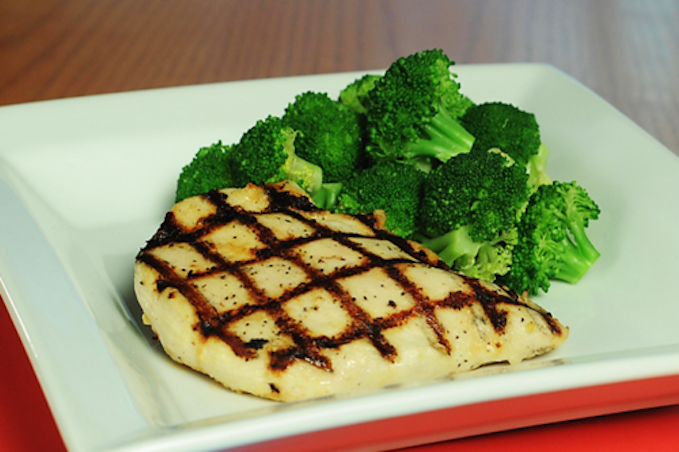 As you might imagine, I work with many different types of guys as part of my job as a trainer.

Some of them don’t have much of a concept of nutrition at all, so much of our initial work together involves teaching them which foods are high in each macronutrient, overall calorie consumption, among other things.

These guys are clean slates, and don’t have many years of fallacious dietary baggage holding them back from achieving their goals.

They just need to learn what to do, follow through, and they’ll see results.

In many ways, these guys have a big advantage over those that already have an established set of dietary beliefs.

“Too much protein will destroy my kidneys” (it doesn’t).

All of these are just plain wrong, but thoroughly debunking each one isn’t the subject of this article…

Instead, I’m going to dissect another belief that I encounter all the time – the tortured love affair that many guys seem to have with grilled chicken and broccoli.

It’s So Boring It Must Be Good

OK, so first of all, I want to make something perfectly clear: there is absolutely nothing inherently wrong with either grilled chicken or broccoli.

Chicken is a great source of lean protein, whereas broccoli is chock full of fiber and rich in micronutrients.

They are good, nutritious foods.

But they aren’t magical foods, and they don’t need to make up the bulk of your diet every day.

Doing this will lead to all sorts of imbalances, making it unnecessarily difficult to put on muscle – and may even jeopardize your fat loss goals.

And, of course, forcing yourself into a soul crushing cycle of dietary tedium will make you much more likely to throw your hands up in the air one day and say “to hell with this”.

I get it. Living without flavor just plain sucks – and after your willpower ultimately wanes, you’ll inevitably find yourself knee deep in an existential crisis, where you weigh out whether having the body you want is worth forever forgoing taste.

I know because I have been there myself, and I want to spare you the needless, counterproductive unpleasantness.

Where Did This Belief Come From?

Like many of the false nutritional beliefs that guys have, the “grilled chicken and broccoli” belief is a combination of several different factors – which is precisely what makes it so powerful and often difficult for guys to shake.

As I’ve discussed before, there is a widely held, yet completely false, belief that you must eat only clean foods to lose weight and build muscle.

Combine that with what people think that bodybuilders normally eat. For those that aren’t familiar, it often resembles something like this 5-6 times per day. 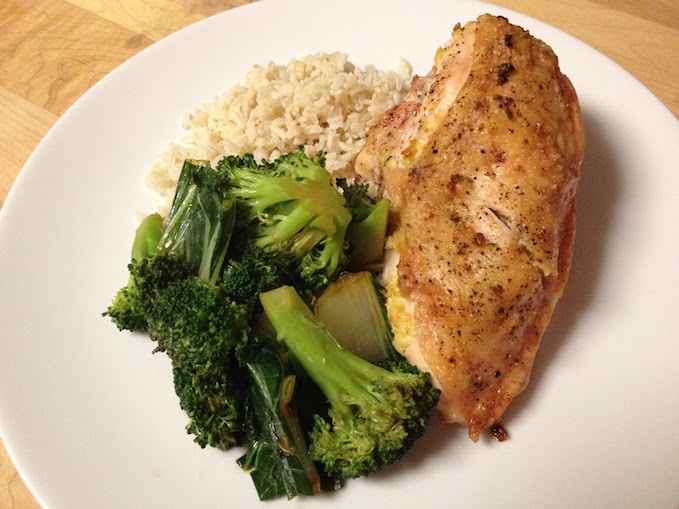 Finally, these days we are all deeply entrenched in a carbaphobic nutritional era – where even a molecule of glucose that sneaks its way down your throat can threaten to derail all of your progress.

I’m joking, of course, but many people feel that way…

So, naturally, this means that there won’t be any brown rice with that meal either, leaving you with, ta-dah, an unappetizing portion of just grilled chicken and broccoli.

And since you feel that you need to eat 5-6 times per day, lest your muscles shrivel and wither away, these 300-400 calorie doses of chicken and broccoli can start to seem like exactly what you should be eating for every single meal.

How It Actually Plays Out

Whenever I take on a new client, one of the first things I’ll do is have them log everything that they eat for a week.

This helps to provide a baseline for what they’re doing now, and then allows me to suggest the appropriate changes.

And whenever I get a client with the grilled chicken and broccoli belief, a familiar pattern generally emerges…

Their calories are typically too low.

Their protein is often too high.

Both their carbs and fats are far too low.

They are eating so carefully, so cleanly, yet they don’t have the types of bodies that they want.

They typically struggle to put on muscle, and often have that skinny-fat look, despite their commitment to eating ‘healthy’.

And more often than not, they are incredibly frustrated with the entire thing!

Why aren’t they muscular and ripped if they are eating only the cleanest, safest, healthiest foods all the time?

The fix for this is not as simple as it sounds, and often necessitates changing several of the deep-seated beliefs that originally led to this unhealthy affair.

First of all, I gradually help them break free of their fear of carbs. Carbs don’t make you fat, an excess of energy (in the form of calories) makes you fat.

This topic warrants its own article, but for now I’ll just say that there is nothing evil about carbohydrates, and they are fundamentally necessary if you are going to have the quality of workouts that allow you to build muscle properly.

Without adequate carbs, your workouts will just plain suck, since you won’t have adequate glycogen to properly fuel them.

Secondly, I’ll work to unravel the myth of clean eating – that you must only eat the cleanest foods in order to get in great shape. Again, this simply isn’t true.

Next, I’ll cover why one doesn’t need to eat 5-6 meals each day (if you don’t want to), which means that each meal can contain more calories and more interesting foods choices, even while maintaining a caloric deficit for the day.

Basically, I teach them to break free of the psychological bondage of this restrictive thinking, allowing them to be considerably more flexible with their diet while getting better results than they ever have before.

Want to see an example of what flexible eating looks like?

Well, here is a window into how I personally do it…

This is a photo of me from this morning, weighing 182 pounds and at around 8% body fat. 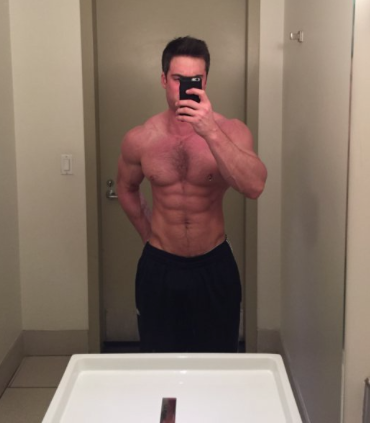 Just as I recommend for my clients, I use regular progress photos as a way to gauge how things are going.

Now if you think that I eat grilled chicken and broccoli all day long, you’d be sorely mistaken…

On the contrary, I eat a wide-assortment of foods – all of which I enjoy eating.

Here is what I ate yesterday for lunch: 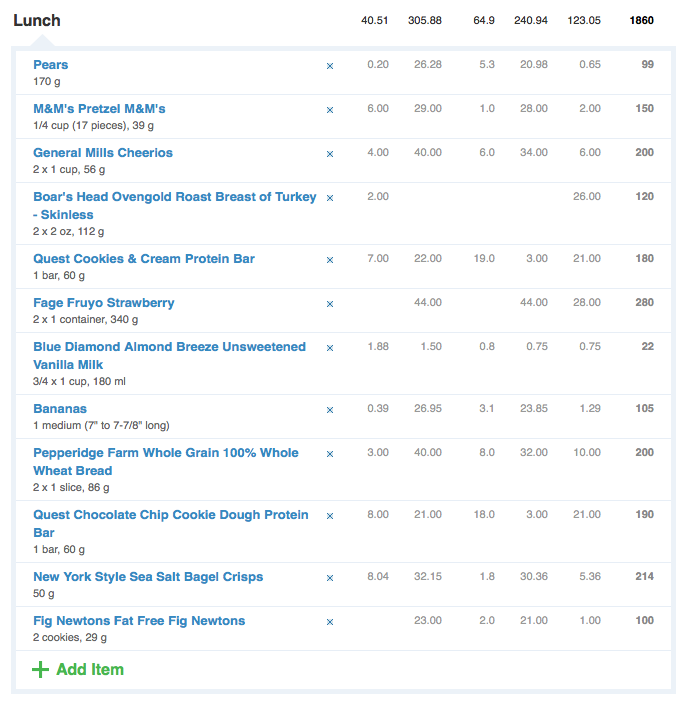 Yup, I like to fast throughout the morning, and then have really big lunches. As you’ll see, it’s mostly made up of healthy foods, but there is also some pretzel m&ms and bagel crisps in there too.

More importantly, you’ll notice that there are whole lot of carbs in there, in addition to a good amount of protein, and a moderate amount of fat.

Later on, this is what I ate for dinner: 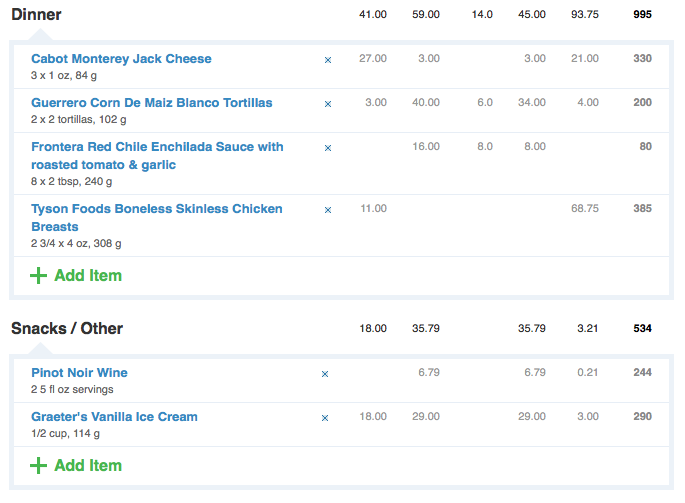 As you can see, there was some chicken breast in this one, but as part of a delicious and easy-to-make enchilada casserole that’s more than easy on the tastebuds (you can see the recipe for it here).

And with dinner, I also had 2 glasses of wine and 300 calories of ice cream.

This wasn’t a cheat day. This wasn’t me being bad. This is pretty much how I eat every single day, varying the foods up as I please.

What To Take Away

The purpose of this post wasn’t to brag about how much I love my diet, but rather to illustrate a point…

You simply don’t have to eat plain, boring foods like chicken and broccoli all day long in order to be lean and muscular.

Yes, you will probably have different requirements than me, but the principle remains the same.

This is just an example of how I like to do it, but that’s the thing about flexible dieting…it’s flexible.

So if there is one thing that I want you to take away from this article, it is that dieting doesn’t need to feel like a chore.

You simply don’t need to eat grilled chicken and broccoli 6 times a day to meet your goals.