What Are Forced Reps & Should You Do Them? 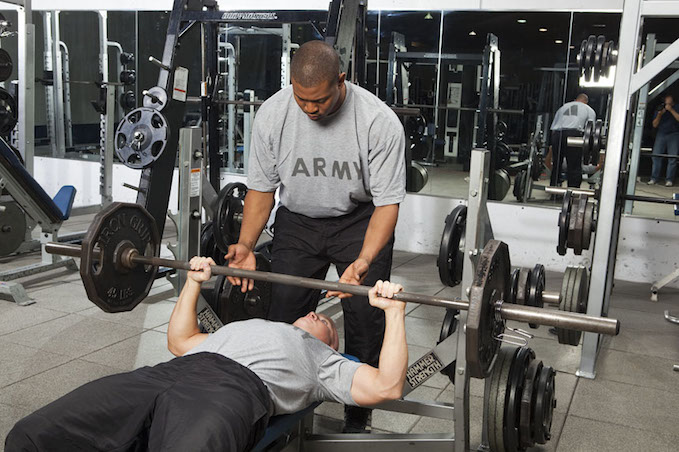 Forced reps are one of the many training variations that you’ll see people doing in the gym.

Since forced reps inherently require a spotter, you’ll generally see them done by people who have a regular workout partner.

Basically, forced reps are done after you have run out of steam on a set. At this point, the spotter will pick on the necessary slack, lifting an ever-growing percentage of each remaining rep for you and allowing you to complete the set.

Now sometimes you’ll get people who just impose this on their spotters without telling them, which is an example of bad gym etiquette; however, other people use forced reps as a regular part of their training methodology, believing that it helps them get bigger and stronger.

So, in this article, I am going to take a proper look at forced reps, and whether or not you should consider including them as part of your training routine.

Not Every Exercise Works With Forced Reps

Before I begin, though, I want to clarify that not every exercise can be done with forced reps.

There are some exercises where it would just be incredibly awkward – if not really dangerous – to try to have someone spotting you for forced reps.

However, many of the tried and true favorites certainly do – such as the bench press, bicep curl, shoulder press, tricep extensions – and even the squat!

OK, so now that I’ve clarified that point, let’s move on to whether you should be training with forced reps or not.

Why Some People Think Forced Reps Are Effective

When working out at the gym, there is a tendency to want to do as much as possible – to push yourself to the max.

You will literally fail on every forced rep set at some point, and it will be up to the spotter to save you from getting crushed during the later reps that you can’t do by yourself.

The reasoning here is that with forced reps you are able to do more volume in each set.

A set where you could normally only do 5 reps by yourself turns into a set of 8 reps with this approach.

The first 5 reps are all you, whereas for the last 3 reps you and your spotter are both lifting the weight.

Typically, when the spotter is lifting more of the weight than you are, the set ends – assuming that you have not already reached your rep goal.

In many ways, then, force reps are actually quite similar to drop sets – the only difference being that the idea of decreasing the load without rest is combined into one set.

Basically, once the forced rep portion of the set has begun, you are no longer lifting all of the weight anymore – so, in effect, you are actually lifting lighter and lighter loads with each successive rep.

For example, let’s say that you are doing an 8 rep set of bench press with forced reps.

You are using a weight of 225 lbs, which you are able to do for 5 reps by yourself.

By rep 6 you’ve given out, so your trusty spotter jumps in and upright rows some of the rep for you.

And by rep 8, you are only lifting 155 pounds of the rep by yourself, with your spotter upright rowing the remaining 70 lbs.

In doing so, you are effectively increasing the volume of each set, while progressively decreasing the load, which is the entire point of doing forced reps as a deliberate strategy.

So Should My Workouts Include Forced Reps?

I’ll cut to the chase here…

In my opinion, if you are a natural weightlifter who is primarily concerned with getting bigger and stronger, then you should not be doing forced reps.

Forced reps will only lead to greater levels of cellular fatigue in your workouts.

This means that you’ll likely get more of a pump, and feel like you’ve had a good workout.

However, what this won’t do is help you lift heavier and heavier weights.

For those of you that have read my other articles, you know that progressive overload is the most efficient way to stimulate muscle growth for natural weightlifters.

This means that if you’re not using performance enhancing drugs, then the reality is that if you want to get bigger, you’re going to need to get stronger.

And this means progressively lifting more and more weight over time.

So I’m sorry to be the bearer of bad news here, but forced reps are not going to do this for you.

In fact, they’ll probably end up doing the opposite; that is, limiting your overall strength gains and muscular development.

You’ll be so fatigued from those grinding forced rep sets that there is no way that you’ll be lifting at your max potential for later sets.

Remember, everything you do should be about putting yourself in a position to lift as much as weight as possible, within your given rep range.

This is why I recommend longer rest times between sets, a limited number of total sets per workout, among other things that are designed to maximize your strength for each set.

Forced reps are not on this list since they don’t maximize your strength for later sets; instead, they only serve to deplete it.

Now if that was the only thing wrong with forced reps, it would be a perfectly fitting end to my tirade.

But I’m not done.

That’s right, there is another major problem with including forced reps as a planned part of your workouts.

And that is that your understanding of how much weight you can actually lift will be very much distorted.

You see, the guy in my above bench press example would probably go away thinking that he can do 8 reps of 225 lbs.

I mean, it kind of looked like he did it, right?

And if he asks his spotter/friend how much he helped, he’s likely to reply “oh, it was mostly all you man”.

But this is a lie, even if it is well-meaning one.

It wasn’t all him. The spotter was doing an ever-increasing amount of work – and this effort is extremely difficult to quantify.

Which leads me to the second major issue with forced reps: if you do them regularly it’s going to be extremely hard to log your workouts properly.

You can’t log accurately because you don’t know how much you actually did. So you play the optimist – or the pessimist, depending on your nature – and either way you are likely to be wrong.

And without logging your workouts properly, you are severely limiting your ability to incrementally increase the amount of weight you’re lifting each time you go to the gym.

OK, so I’ve spent much of this article hating on forced reps.

But I want to clarify something before I finish up…

There is nothing wrong with having a spotter genuinely help you on a final rep if you can’t finish it yourself.

But it should never be more than 1 rep, and it shouldn’t be planned.

The spotter is there as a failsafe and a confidence booster. Nothing more.

Finally, as I mentioned before, all of this advice is only intended for natural weightlifters that primarily want to get bigger and stronger.

If muscle endurance is your goal, then forced reps might be more applicable for you.

Likewise, if you’re on the juice, then you may be able to handle (and benefit from) the increased volume and muscle fatigue that forced reps provide.

But the bottom line is forced reps are an utter waste of time – and actually counterproductive – for non-roiding lifters who want to build lean muscle mass efficiently.