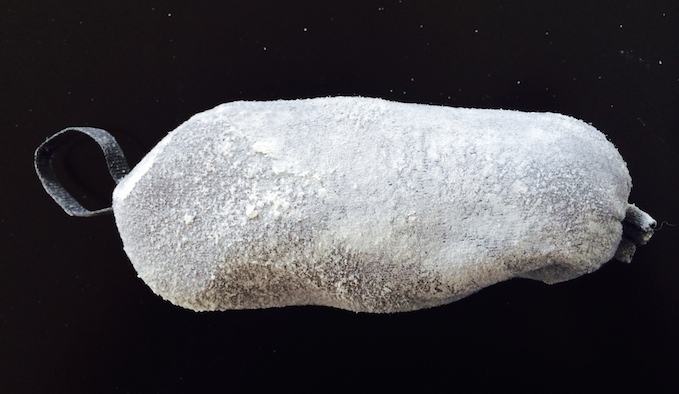 Grip is an often-overlooked aspect of weight training.

I’ve written about this before, and have made some suggestions for improving grip strength, including regularly training with Captains of Crush grippers.

But in addition to the sheer strength of your grip, you also want to make sure that your grip doesn’t slip when you’re holding the bar.

Of course, this matters for some exercises more than others – and, arguably, it is by far the most important when you’re deadlifting.

If you don’t have a strong, firm grip on the bar when you deadlift, you won’t be able to lift nearly as much weight, and will find that your grip is actually the limiting factor, as opposed to the strength of your core muscle groups (your back, your glutes, etc).

As you might imagine, there are lots of solutions to this problem – the most common of which are either wrist straps or chalk.

Unfortunatley, both of these have obvious downsides.

Relying on straps for your heavy deadlift sets can cause significant imbalances in your grip strength. Your grip really isn’t being developed properly if you do this, which is why I don’t recommend this as a solution.

Chalk is generally considered to be the best solution to this problem. It will reduce sweat, and can really help you grip the bar much tighter – while at the same time still developing your grip strength proportionally as you progress with the amount of weight you’re lifting.

But chalk has its own set of problems…

Namely, it can be really, really messy!

You’ll generally know if someone has been using chalk at the gym since there will be trails of white powder all over the floor, and sometimes caked onto the bar itself.

Because of this, many gyms don’t look kindly upon chalk, and have resorted to banning it.

Yup, you’ll find that if you bring in a box of chalk to most mainstream gyms, you’ll eventually be asked to leave it at home.

Thankfully, there is a perfect solution to this problem – one that provides all of the benefits of chalk, but without any of the mess. 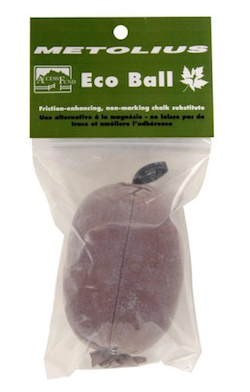 Climbers probably rely on their grip more than just about anyone…

Yup, if you are climbing a wall – or the side of a mountain – you just can’t afford to have your grip give out on you.

So it only makes sense that climbers are the ones to turn to when looking for appropriate grip solutions.

And the best one that I’ve found, by far, is the Eco Ball, which is manufactured by a company called Metolius.

Metolius makes all sorts of climbing gear – ranging from harnesses to cams – but their nifty chalk alternative has become increasingly popular among weightlifters.

It is essentially just a small sack, filled with their proprietary chalk alternative.

Why is this better than actual chalk?

Well, it basically has all of the advantages of chalk, but without leaving any significant residue.

This means that it can be used in gyms that don’t allow chalk, since it doesn’t produce any real mess. Frankly, no one will even know if you are using it, or what it is.

How Does It Really Compare To Actual Chalk?

I have used both traditional chalk and the Eco Ball extensively, and firmly believe that there is no functional difference between them, in terms of their application for weightlifting.

Yup, the Eco Ball truly lives up to its promise – providing all of the grip improvement and sweat reduction benefits of chalk, without leaving a cloud of chalk dust in its wake.

However, if you are used to using regular chalk, you should note that it doesn’t layer on to your palms quite as thickly.

So don’t expect your palms to be completely white after you apply it, as they would be with chalk; instead, it provides a lighter coating, but is just as effective as the real thing.

Here is a picture of how your hands should look when it has been properly applied. 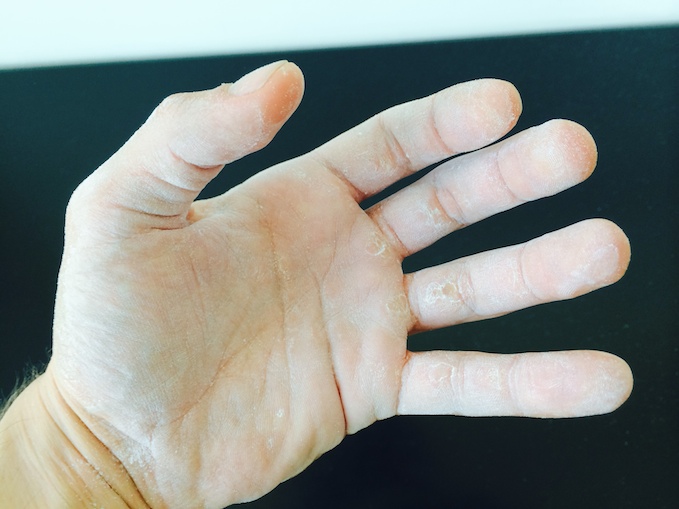 Plus, I find that it is easier to apply than chalk. You just gently massage the eco ball in your hands for a few seconds and you’re done.

You are probably wondering how much this thing costs, right?

I mean, even if it works well as a chalk alternative, you probably aren’t going to run out and buy it if it costs 10 times as much.

Not to worry, this thing is really cheap.

Yes, you can order an Eco Ball from Amazon here for under $4.

What’s more, they last for ever. I have been using mine for months, and it is showing no signs of needing a replacement. Other guys report using them regularly for years, so it definitely is an amazing product in terms of value.

I should point out, however, that some guys have reported popping their Eco Ball if they squeeze it too hard. This will make a mess, so treat it gently and save your crush grip for your actual sets. This hasn’t happened to me (yet), and I don’t want it to happen to you either!

Finally, this should go without saying, but you don’t want to get any of the Eco Ball residue in your eyes…

I have done this. It really hurts – and you don’t want to have to cut your workout short as you dart for the bathroom to wash your burning eyes out.

To help avoid this, I would recommend washing (or at least wiping off) your hands after you finish using it.

But aside from that minor point – which you really can’t blame the Eco Ball for, anyway – this thing is an absolute no brainer.

I would strongly urge you to try this out; it will improve your deadlifts, and you’ll wonder how you ever lifted without it!

Do you use an Eco Ball? What have been your experiences with it? We’d love to hear your thoughts in the comments below.