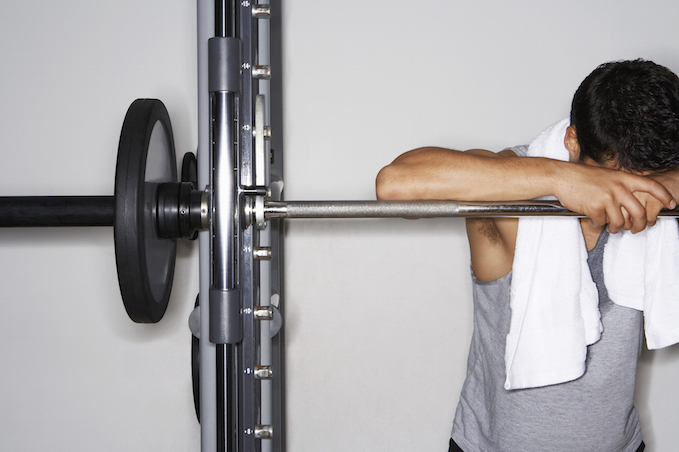 I’m going to tell you a little secret…

I hate feeling sore after my workouts.

Yup, I know many gym-going people who seem to love that post-workout muscle soreness – but to me it is a useless byproduct of training that should be avoided whenever possible (I’ll get to why in just one moment).

For those of you who aren’t sure what I’m rambling on about, I’m specifically talking about Delayed Onset Muscle Soreness – or DOMS, as it is more commonly known.

It’s a rare person that works out who hasn’t experienced the muscle soreness, also known as ‘muscle fever’, that tends to occur roughly 12-24 hours after a workout – and can be at its most intense around 48 hours afterwards.

And for some (unlucky) people, it can take up to 7 days for the soreness to completely subside!

Anecdotally, DOMS tends to be the worst after leg workouts – or maybe it’s just because you tend to feel it more, as you hobble around the world like a 90 year old with debilitating arthritis…

Even going to the bathroom can be a pretty painful experience if you’ve been struck with a bad case of DOMS (admit it, you know what I’m talking about).

So in this article, I’m going address what delayed onset muscle soreness really is, why it happens, if it’s preventable, and how best to treat it once it’s reared its ugly head.

Doesn’t DOMS Mean You Had A Good Workout?

This is a common misconception that many people tend to have…

And it at least in part explains why gym rats tend to relish this inherently unpleasant phenomenon.

To them, it is a sign of progress – that you had a ‘good’ workout – and that, by extension, you’re probably going to get bigger and stronger as a result.

Well, I hate to burst your bubble here, but the level of DOMS you experience has absolutely zero correlation to the quality of your workout.

Yup, that’s right, it is not an indicator of progress at all.

As studies have shown, the soreness that you feel after a workout does not necessarily indicate that you are going to see any muscle growth.

Likewise, as other studies have demonstrated, you can grow bigger and stronger without experiencing any post-workout soreness whatsoever.

So if you’re like most people, and the purpose of your workouts is to get bigger and stronger, then you should reject any masochistic desire to feel DOMS.

Much like ‘the pump’, which also feels like it should indicate progress, DOMS doesn’t mean that anything particularly useful is going on.

On the other hand, when you get hit with a bad case of delayed onset muscle soreness, it can have decidedly negative consequences:

So now that we understand that DOMS doesn’t mean anything positive, and that it can instead have numerous negative effects, let’s take a look why this tends to happen in the first place.

The truth here is that the underlying mechanism that is responsible for DOMS isn’t completely understood (at least not yet).

For years, it was thought that lactic acid build-up was responsible for DOMS; however, more recently this theory has been largely discredited, since lactic acid levels tend to return to normal within roughly 1 hour of training a muscle.

Instead, the prevailing opinion is that DOMS is actually caused by something called microtrauma – which you can think of as small scale damage to the muscle fibers.

It should also be noted that DOMS is primarily caused by muscle damage that occurs during the eccentric phase of exercise, which is where you are lengthening the muscle.

Finally, I should also mention that DOMS tends to occur most when your muscles are being exposed to new stimuli.

That is to say, you’ll likely notice it most when you first start exercising – or when you’ve had to take some time off for whatever reason.

Personally, I rarely get any noticeable DOMS when I’m working out consistently, but whenever I take a rest/deload week I get it really bad after leg day when I return to the gym.

Then, after a week of lifting again, it’s all back to normal without any significant post-workout soreness.

Now as I was saying before, DOMS only tends to be a problem for most people when they’re not training a specific muscle group frequently enough.

So, if you get bad leg DOMS, then I would suggest not skipping leg day regularly, since you’ll only be increasing the likelihood that you’ll experience this delayed muscle soreness (you shouldn’t be skipping your leg workouts anyway, but this should hopefully help reinforce that message).

Taking that point one step further, you might be thinking that avoiding rest or deload weeks can help to prevent DOMS.

And while this may well be true, to a point, there are various other reasons why taking the occasional rest/deload week is important – far more important, in fact, than the occasional case of post-workout soreness.

OK, so now that that is out of the way, is there anything else that you can do to help prevent this?

Some people have recommended static stretching before and after your workouts, but studies have shown that this does not impact the severity of DOMS at all.

However, active recovery has shown to be helpful at reducing delayed onset muscle soreness.

All this means is simply doing some cardio after you finish a workout that is likely to cause severe soreness – targeting the muscles that you trained, but in a less intense way.

For instance, using the elliptical machine or exercise bike after a leg workout can help to reduce the potential for leg soreness.

In addition, making sure that you are properly hydrated has also shown to be important for reducing the potential for severe post-workout soreness.

Finally, both massage and foam rolling have been demonstrated to help limit the development of muscle soreness after you’ve worked out.

These various preventative options are all well and good, but what if you are suffering from a bad case of DOMS right now?

Well, sorry to break it to you, but there isn’t too much you can do once you’ve been hit with it.

Gym folklore remedies like taking an ‘ice bath’ in freezing cold water have been shown not to be effective, so don’t put yourself through that unpleasantness needlessly.

Moreover, once you have developed the symptoms, it’s a bit late for massage or foam rolling…

What you can do, however, is take care of yourself and give your body everything it needs to recover as quickly as possible.

There is also some evidence that taking anti-inflammatories can help speed up your recovery – although this can also hinder protein synthesis, so you may not want to do this.

Finally, anything that can increase blood flow to the area can be helpful – so if possible take hot baths or visit the sauna.

Most importantly, don’t feel like you have to rush back to the gym and work through the pain if it is particularly unpleasant.

There is a balance between the whole ‘no pain no gain’ thing, and not being stupid by trying to push through a hard workout when your body is clearly telling you to stay at home for another day or two.