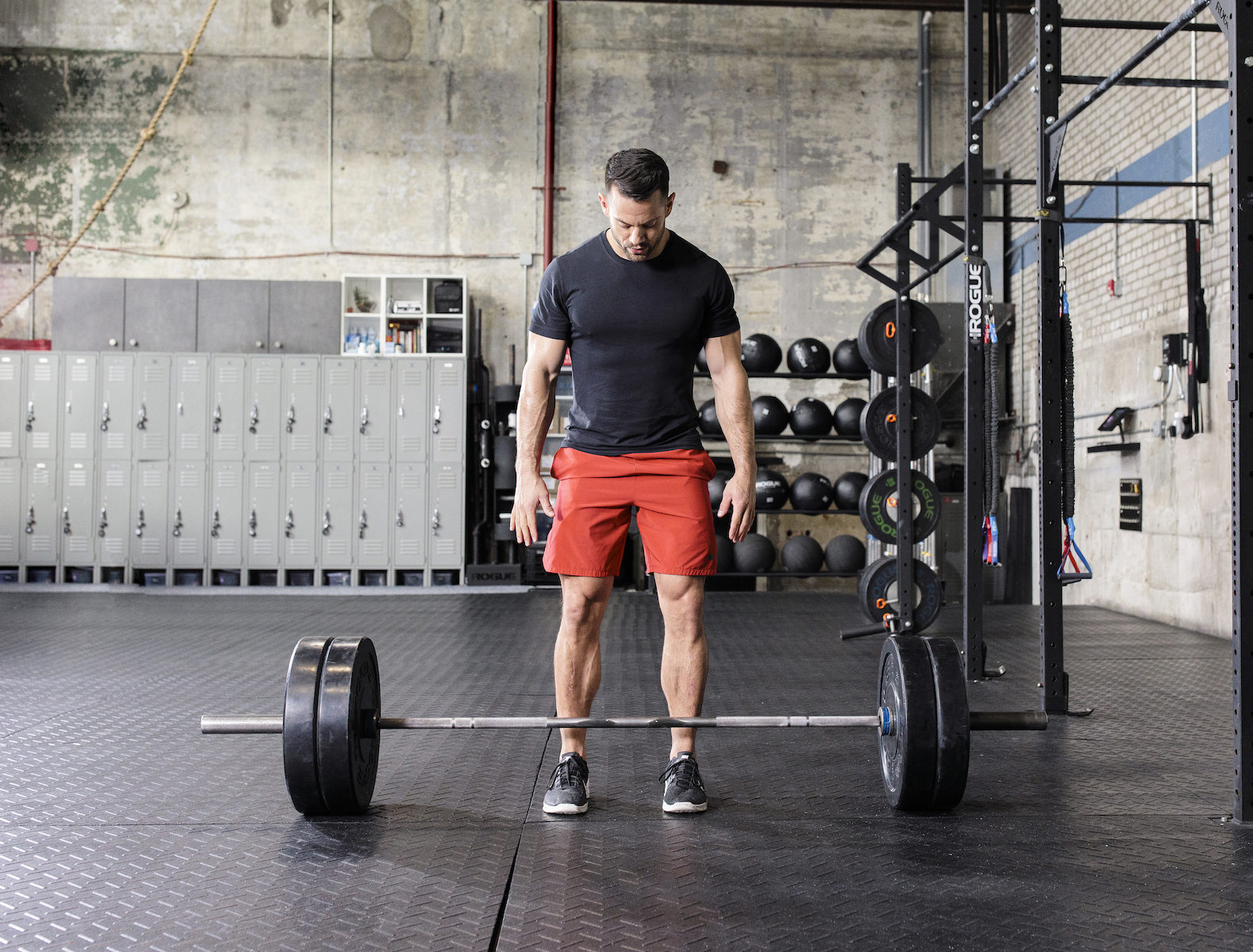 The deadlift can be a problematic exercise for many people.

On the one hand, it’s arguably one of the very best back exercises out there, and is almost indispensable for developing a well-rounded, muscular physique.

And for many people, it’s also the exercise where they are lifting the most weight, in terms of sheer poundage.

For sure, there is something very satisfying – almost affirming – about being able to pick up hundreds of pounds from the ground.

But then there is the other side to the deadlift…

Compared to many other exercises, it is extremely easy to do it incorrectly, with poor form.

In fact, the majority of people deadlifting are doing it wrong.

This means that they are not getting as much out of the exercise as they could be, and are often really risking injury in the process.

But not to worry – to help all of you deadlifters out there, we’re going to go over all of the most common deadlift mistakes.

Let’s dive right in and get your deadlift form up to speed!

1) You’re rounding your lower back. 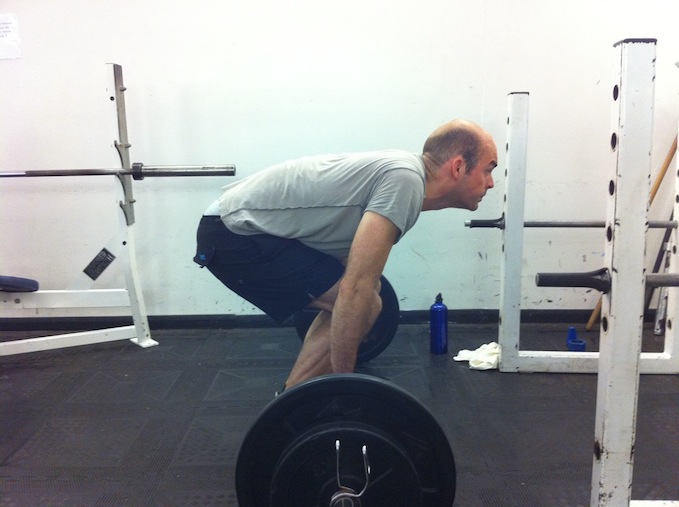 This one is one of the most common – and most dangerous – deadlift mistakes that we see people make.

If you deadlift like this you are very likely to hurt yourself.

And there is nothing like that stabbing pain in your lower back during a deadlift, which immediately lets you know that you’ll be taking a week or more off from the gym…

When you deadlift, you want to make sure that you have a flat, firm back throughout the entire movement.

Doing this in practice, however, is easier said than done – especially if you’ve built up years of bad deadlifting habits.

But as you smooth out your other deadlift issues, this should start falling into place.

So let’s get to them. 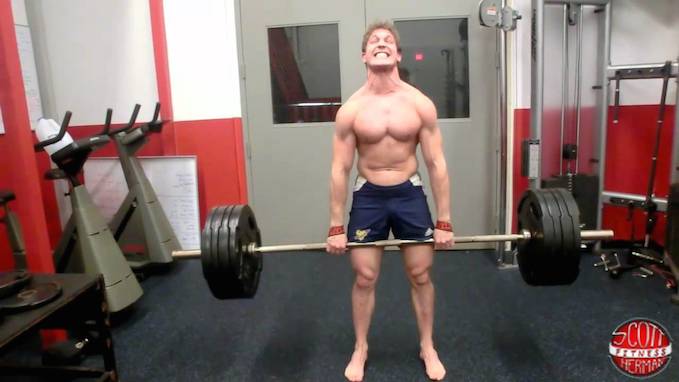 Fixing this issue can be the single biggest factor at improving your deadlift, so listen up.

You see, technically speaking, the deadlift is considered a ‘pulling’ movement.

That is, you are pulling a dead weight off of the floor, and then putting it back down again.

However, if you literally attempt to pull the weight up to to start the movement, 2 things will probably happen:

1) You won’t be able to lift nearly as much weight.

2) You will risk hurting yourself, by putting too much of the strain on your lower back.

What should you be doing instead?

Well, instead of focusing on pulling the bar off the floor, you should initiate the movement by pressing through the floor with your legs – as if you were somehow leg pressing the earth away from you.

When you start your deadlifts like this, assuming the rest of your form is decent, you’ll find that it puts far less noticeable stress on your lower back, and just feels much more controlled and fluid in general.

3) You’re trying to squat the weight up. 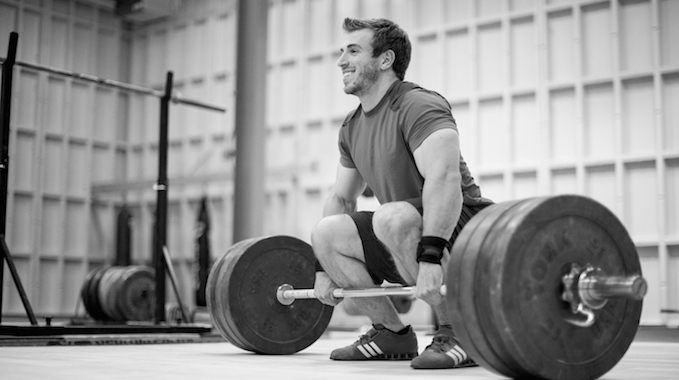 As a result, they end up turning the deadlift into a squat.

And while the 2 exercises have their similarities – the deadlift is not simply a squat in reverse.

Basically, people that make this mistake end up trying to start the movement as if they were at the bottom of a squat, with their hips below parallel.

Then, what often ends up happening, is that they effectively squat the weight all the way up – and then bring their hips forward afterwards, as 2 separate movements.

Instead, you should start the deadlift in a half-squat position, which will have your hips above parallel, and will keep your knees from sticking out as much.

Which leads us to the next mistake…

4) You’re banging your knees with the bar. 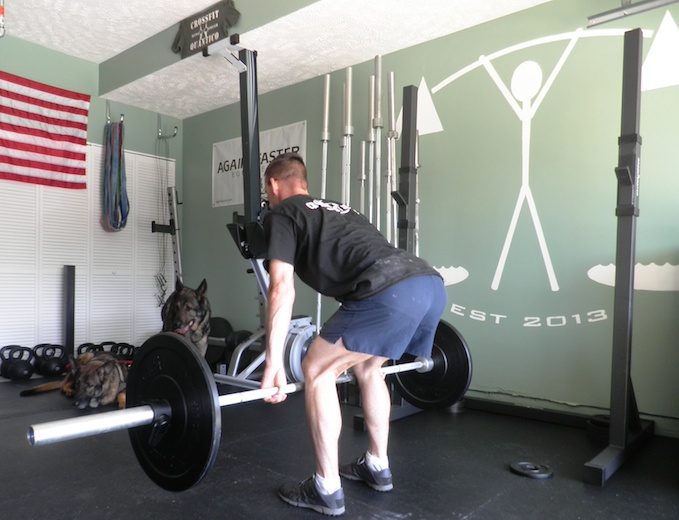 Anyone who deadlifts knows that feeling of scraped shins.

It isn’t fun, and it’s the reason why many people opt to wear gym pants on deadlift day instead of shorts (in addition to pulling up their socks).

However, scraping your shins with the bar is not an example of bad form; on the contrary, it is often a sign that you are doing the movement correctly.

The same cannot be said for banging your knees with the bar.

This will inhibit the bar from traveling in a straight line, making the entire lift more jerky – not to mention hurting your knees with each smash.

For most people, the easy fix is to stop squatting the weight up, and instead begin the deadlift from a half-squat position, as we mentioned above.

If this isn’t sufficient, and you still find yourself banging your knees with the bar, then you should experiment with angling your toes outwards at differing angles.

This will cause your knees to come in more, but can also decrease stability, so experiment to find the right balance for you.

5) You’re not pushing your hips back. 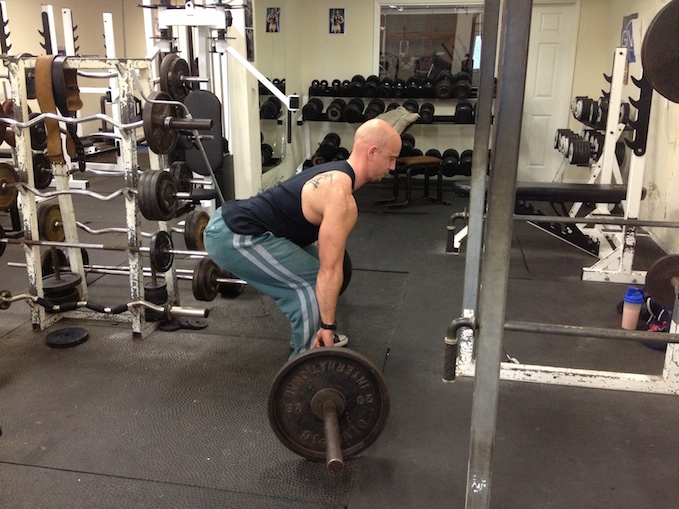 When you’re gearing up to start your deadlift set, your butt should be really pushed back.

This means that it’ll be comfortably behind your feet, while your back remains flat, and your hips are slightly above your knees.

By starting like this, you’ll be able to begin the deadlift by pushing with your legs (as we mentioned above), but then also flexing your glutes to drive your hips forward and help the bar travel efficiently up your body. 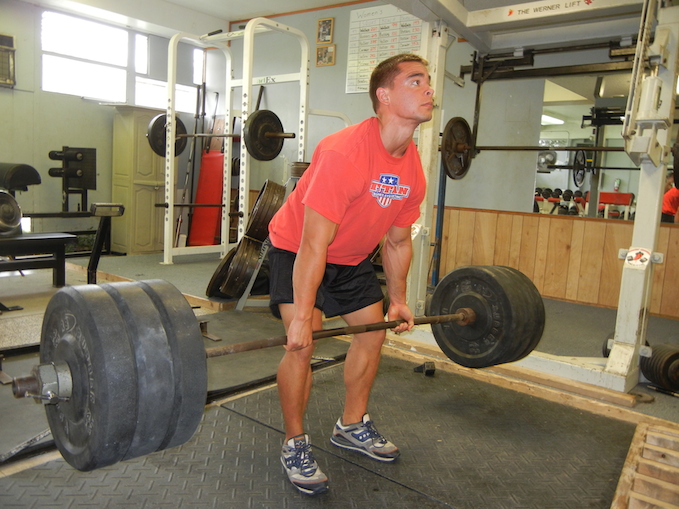 Your arms should be straight through the entire movement – from start to finish.

There should never be a moment where you even attempt to curl some of the weight!

If you do this, it is incredibly easy to tear your bicep – a seriously painful and debilitating injury that we don’t want you to ever experience…

Thankfully, avoiding this is fairly straightforward: just keep your elbows locked and don’t bend your arms.

7) You’re starting from the rack instead of the floor. 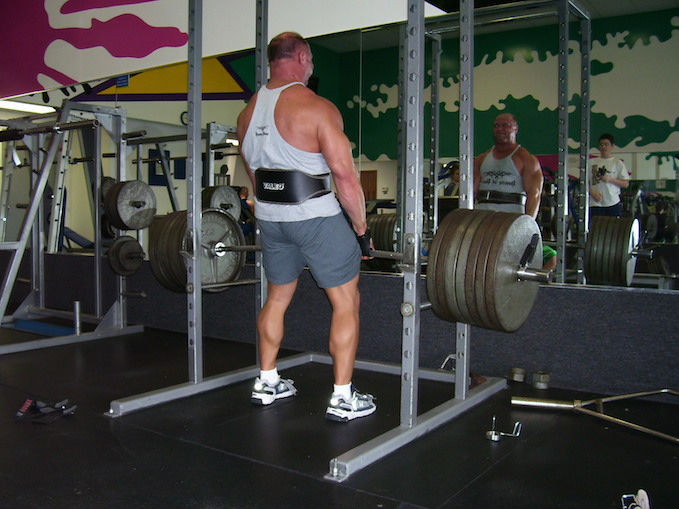 While there are some variations of deadlift that begin from the rack – such as the stiff-leg and romanian deadlift – the regular deadlift should always begin by you lifting the weight off the ground.

If you try to deadlift from the rack, the lift becomes much more awkward and dangerous – and you won’t be able to lift nearly as much weight as if you start from the floor.

In addition, it is extremely difficult to treat the movement as a ‘pushing’ motion if you begin from the rack, so please don’t ever do this!

8) You’re not putting the bar down after each rep. 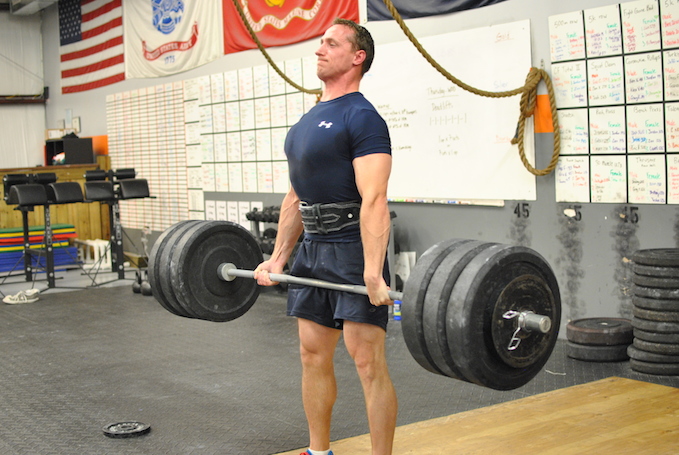 The exercise is referred to as a ‘deadlift’ for a reason…

And that reason is that you are lifting ‘dead’ weight off the floor.

Yes, there are some gyms that will frown on this, and try to sell you on the idea that this is not the right way to deadlift.

They are completely and totally wrong, so don’t listen to them.

Remember, they have their own agenda here: to limit excessive noise from the bar dropping, and also to avoid giving the mistaken impression that people are actually working out hard.

We should also note that it’s perfectly acceptable to pause for a second between reps, to check your grip and make sure that your form is solid – so don’t feel like you need to bounce the weight off the floor and use momentum to try to lift it back up.

Again, it is called ‘deadlift’ for a reason!

9) You’re not bending your legs. 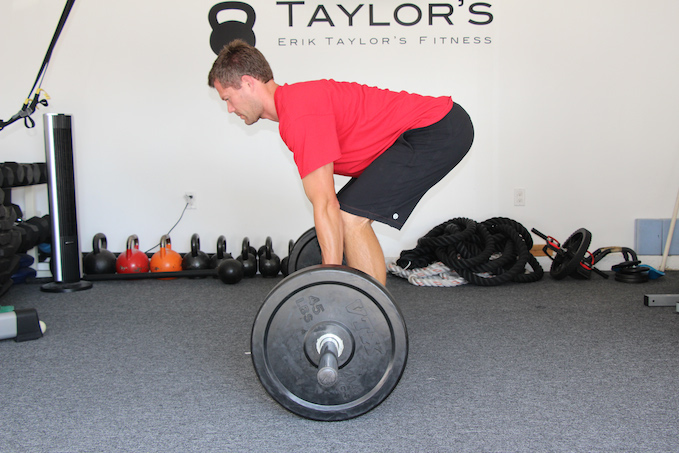 Typically this happens when you start with your hips too high, which puts the majority of the load on your lower back instead of your legs.

As long as you remember to start in a half-squat position, you should be all set.

10) You’re hyperextending your lower back. 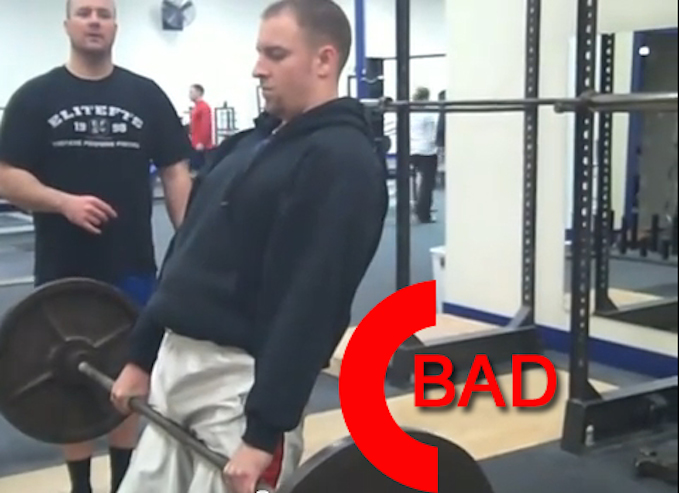 This typically happens at the top of the lift, when some people go to ‘lock out’ the weight.

In an effort to do so, they make an exaggerated movement with their lower back, risking giving themselves a hernia.

There is simply no need to do this at all; instead, start putting the weight back down once you have stood up straight and locked both your knees and hips. 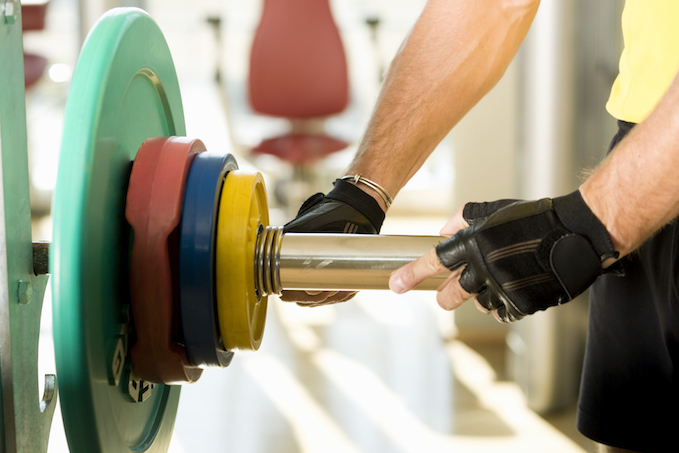 While the effectiveness of ever wearing weightlifting gloves is debatable, you definitely should not be wearing them when you deadlift.

You see, one of the biggest limiting factors when deadlifting is grip strength.

This is why you’ll often see people using either chalk or straps, in order to improve their capacity to hold on to the bar.

When you wear gloves, however, you immediately limit your ability to grip the bar properly – thus decreasing the amount you can potentially lift.

This is because the gloves effectively make the bar thicker, making it that much harder to hold on to.

12) You’re deadlifting in the wrong shoes. 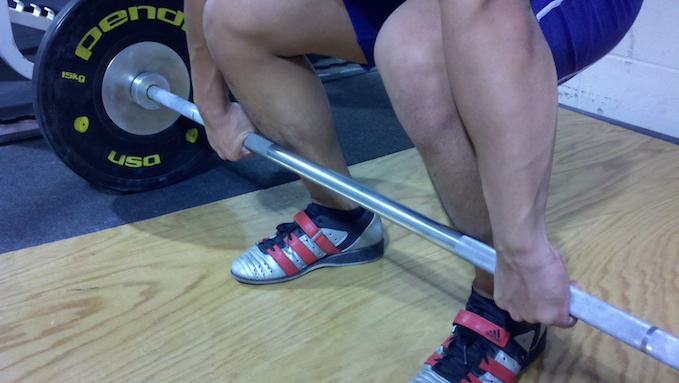 Ideally, you want to be deadlifting in flat shoes with hard soles, in socks, or barefoot.

This provides the appropriate level of stability for the lift, and allow you to properly distribute the weight throughout your foot.

On the other hand, people often wear running shoes to the gym, and proceed to deadlift in those.

Those shoes typically have compressible soles, which create instability during your deadlifts.

If you’ve been deadlifting like this for years, simply changing your shoes could give you an immediate increase in performance. 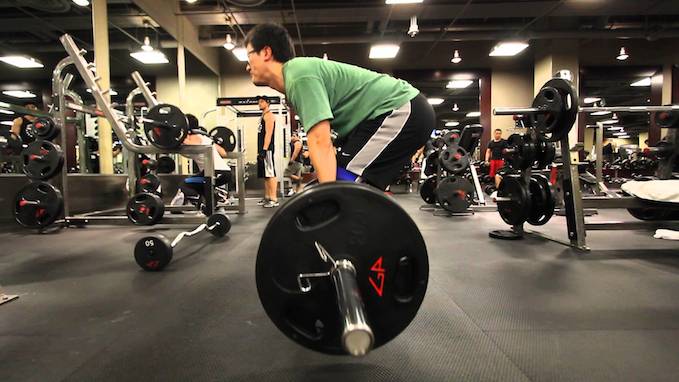 In many gyms, the deadlift rack is positioned directly in front of a mirror.

And in many ways this makes sense, since the mirror can be a great way to check that your form is on point during each rep.

When you deadlift, however, you don’t want to bend your neck out of alignment with the rest of your body.

Instead, you want to maintain a neutral spine position at all times, which means that your head should be aligned with your torso throughout the entire movement.

So, when you get ready to start the lift – with your back straight, butt pushed back, arms locked, and hips slightly above parallel – your head position should also be in a natural alignment with the rest of your body.

For most people, this means starting out by looking slightly forward and down, not straight ahead at the mirror.

Then, as you begin your lift, your head follows your body upwards, leaving you looking forward at the end of the movement when you’re standing up straight. 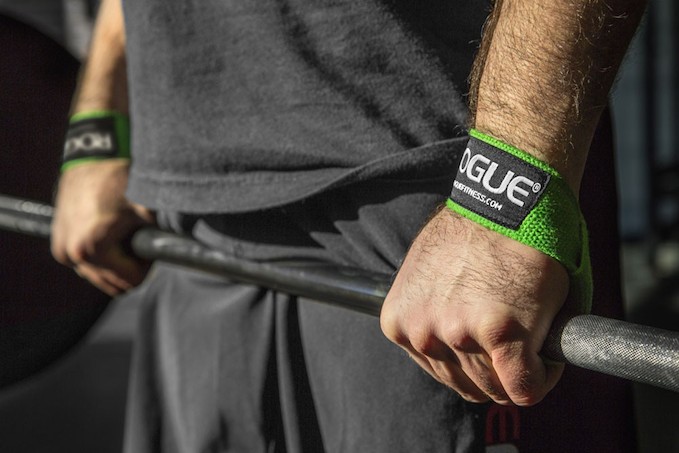 Now this is a somewhat controversial point, which is why we saved it for last.

Some people swear by straps for deadlifts, claiming that the most important thing while deadlifting is to lift as much weight as possible, and straps certainly help you do just that.

Of course, you can strengthen your grip in other ways – but it is very easy to have a disproportionately weak grip if you use straps for all of your sets.

So, instead of using straps, we recommend using chalk, or a chalk substitute instead.

This will reduce moisture and help you grip the bar tighter, while still allowing your grip to get proportionally stronger as you progress in your deadlifts.

Do you really, really want to use straps?

If you do, we recommend not using them for all of your sets, and instead reserving them only for the heaviest ones.

This way, you’ll be able to max out your deadlifts while also straightening your grip at the same time.

Ready to start pulling (or, rather, pushing) more weight? 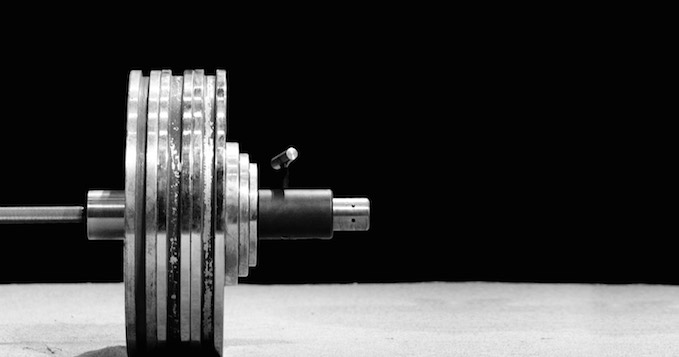 The deadlift is one of those exercises that pretty much every person should be doing as part of a comprehensive workout program.

We know, they aren’t as fun as bicep curls or bench pressing, but they work many muscle groups simultaneously and help you develop a strong back, legs, and core.

So, instead of skipping deadlifts on your next back day, approach them with a fresh mindset.

Now that you are aware of all of these mistakes, pay close attention to your form, and you’ll find that deadlifting becomes much less dangerous and a lot more, dare we say it, fun…