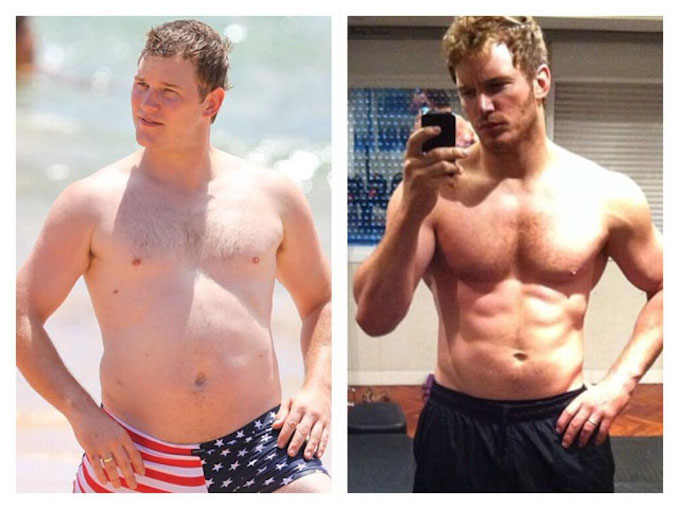 You know that new superhero movie, Guardians Of The Galaxy?

Yeah, the movie that, somewhat surprisingly, has a score of 92% on Rotten Tomatoes.

Who would’ve thought for a superhero comedy that stars a giant raccoon as one of the main characters.

Anyway, aside from being one of this summer’s biggest blockbusters, the movie is also garnering attention for a different reason.

You see, the star of Guardians – an all-american looking, chiseled rogue named Star Lord – is played by none other than Chris Pratt.

You know Chris Pratt. The lovable, bumbling character on Parks And Recreation

Or you may know him for playing a 280 pound alcoholic called Cully in the movie 10 Years.

Yes, Chris Pratt used to be fat, and was hardly the image of a Hollywood leading man.

Then, almost out of nowhere, he shocked the world by losing over 60 pounds for Guardians, and becoming a ripped heartthrob almost overnight.

Predictably, the media has been eating this up – with each major outlet running some sensational variation of “Chris Pratt’s Miraculous Weight Loss Story”.

And it certainly is an impressive story; 60+ pounds in 6 months is quite an accomplishment.

Indeed, there are some sound, practicable lessons that we can learn from Pratt’s body transformation.

However, there is another side to this story – a darker side, which serves to further perpetuate some of the very myths that hold many people back from getting in shape.

In this article, I will address some of the truths that you can glean from Pratt’s accomplishment, as well as casting light on some of the lies.

If you have a lot of weight to lose, the amount of time that you think it will take to lose it all can seem pretty discouraging.

However, if you’re consistent – just as Pratt was – you can lose substantial amounts of weight in a relatively short period of time.

Yes, 60 pounds in 6 months sounds like a lot, but when you break it down it becomes a lot more manageable.

There are 26 weeks in 6 months, which means that in order to lose 60 pounds you need to lose, on average, 2.3 pounds a week.

Admittedly, this is a fairly aggressive weight loss program, but it can be done – and I have personally seen many normal people having similar results with a solid plan.

Yes, by having a suitable workout program and maintaining the appropriate caloric deficit, you can make a dramatic difference to your appearance a lot more quickly than you think.

6 months and an entire new wardrobe later, Pratt demonstrated just how true this can be.

Truth #2: It’s All About The Little Choices

Losing the amount of weight that Pratt did requires some discipline.

But perhaps more important than the discipline is the realization that successfully transforming your body is all about the little choices.

You can see this realization in a recent statement by Pratt:

“I eat that hamburger and that’s 1,200 calories, and I’m gonna work out tomorrow and burn 800 calories. I may as well eat a salad here, still do that workout, and then I’m actually making progress.”

Yup, the reality is that any calorie you eat will either be used for energy or stored as fat. No foods are immune from this simple truth.

Understanding exactly how every dietary choice you make specifically impacts your goals allows you to make better choices.

And, ultimately, building a great body is merely the sum total of 100s of these better choices…

Truth #3: Your Experience Of Life Is Better When You’re In Shape

As Pratt acknowledges, life suddenly got a lot more fun after he built his super hero body:

“I have more energy. I sleep better. My sex drive is up. Blood’s flowing. I’m less susceptible to impulse. I’m in a different mode,”.

Wow, it is hard to come up with a more glowing endorsement than that for getting in shape.

And unlike other lifelong fitness freaks, Pratt would be a fair judge of this – having now lived both experiences within a fairly short period of time.

Yes, the truth is that living simply becomes a lot more enjoyable when you’re in shape. You would be hard-pressed to find anyone that has experienced both realities who would say otherwise.

In fact, quickly getting into great shape can cause you to look at the world in a whole new way; in Pratt’s case, with the exuberance of a child taking in life with fresh eyes:

“When you get in shape, the world around you becomes things you want to jump on and climb on.”

Truth #4: Training Without A Plan Can Produce Disastrous Results

I am a firm believer that having a proper training and diet plan in place is absolutely essential.

Conversely, not having a proper plan is not only ineffective – it can be outright dangerous!

Pratt acknowledges this point when reflecting on his previous weight loss regime, which he did to play a navy seal in Zero Dark Thirty:

“I was doing 500 push-ups a day, working out at the gym, running five miles a day, but with no food, and I tore my body apart … I felt terrible afterwards, had to get shoulder surgery, and I wore myself down doing that because I didn’t have the proper coaching.”

Yup, you can work hard, with considerable levels of intensity, and still fail to get results if you are not following sensible protocols.

For Guardians, Pratt followed a more systematic approach, and was able to lose fat and build muscle without getting injured or burning himself out.

Myth #1: You Need To Work Out For Hours Each Day

Now that we’ve gone over the good parts, let’s take a look at the other side of the story.

When asked about his routine, Pratt is quick to point out just how much he worked out each day:

And when most people hear statements like this, it only serves to make them feel like getting in Pratt-level shape simply isn’t attainable for them.

After all, most people don’t have 3 to 4 hours a day to spend at the gym.

The truth, however, is that you don’t need to spend anywhere close to this amount of time working out to get into amazing shape.

Yes, even superhero level shape, if that’s what you’re going for.

To be clear, I’m not calling Pratt a liar here. He may well have been working out this much, for whatever reason, but it simply isn’t necessary.

In fact, there are some incredibly efficient workout protocols where you only need to lift weights 3 days a week, 1 hour each time, to build a body like this.

Yup, it is a complete myth that bodies like Pratt’s require hours of time each day to train. There are plenty of people that do it in a fraction of that time, by following smart workout routines.

Myth #2: You Need To Only Be Eating Clean Foods

There is a lot of hype about clean eating lately.

And let me be the first to say that there is nothing wrong with trying to eat predominately healthy foods.

However, Pratt, like many other people, makes the mistake of attributing his success to “eating the right food, eating healthy foods”.

That’s right, Pratt is convinced that completely restricting certain foods was a necessary component of his transformation:

We hear this myth all the time – that the amount of weight you’ll gain or lose is somehow dependent on the specific foods that you eat.

This is completely and utterly false; the truth is far less cut and dry.

Pratt could well have been eating a diet composed of very different foods – if he was eating at the correct calorie level and getting suitable levels of macronutrients – and still had the same results.

There was nothing inherently special about his Paleo diet that made him lose weight. And yes, he could have eaten carbs and still gotten in crazy shape.

Now in addition to the 2 myths espoused by Pratt himself, the public reaction to his dramatic weight loss is also telling.

You see, whenever some Hollywood actor gets into fantastic shape, legions of dissenters emerge with all sorts of claims.

So that you can get a sense of what I mean, here is a small sampling of the comments from several of the online news stories about Pratt:

“They have personal trainers and nutritionists and are getting paid to train. No offense Mr. Pratt, you look amazzzing, but most of us can’t afford it.”

“The one thing these actors will never mention is the illegal drugs aka steroids or HGH they were given to help the transformation.”

“That’s much easier to do when that is your only job for months. Same reason people get ripped in prison — because they have nothing better to do.”

Yup, there is the tendency among many people to look at successes like this and dismiss them as being somehow unfair, unattainable, or both.

Some directly accuse Pratt and others like him of taking steroids – believing that such transformations are not possible without them.

Others seem to feel that it is somehow prohibitively expensive to get into Pratt-level shape, requiring teams of celebrity trainers and nutritionists that meticulously analyze and dictate your every action.

The truth, however, is that building a body like this doesn’t require lots of money or steroids.

Yes, it requires some time and effort, but not nearly as much time as many of these people think (see myth 1).

At the end of the day, these Hollywood weight loss stories can unfortunately make getting into great shape seem out of reach.

Most people don’t have the money, the time, or the inside connections that these hollywood actors have.

Thankfully, you don’t need any of these things. Not a single one.

Again, I’ll emphatically state that you can build a body like this by spending very little money, working out a few hours each week, and following a flexible diet that doesn’t require you to avoid carbs or any other foods.

So, in closing, while there are many useful and inspiring lessons that we can take away from Pratt’s body transformation, it is important to not to be pulled in by some of the popular myths that stories like this help to propagate.

Yes, with the proper workout and nutrition plan, you too can get into amazing shape – without having to spend hours in the gym, give up your favorite foods, or have the resources of a hollywood leading man.