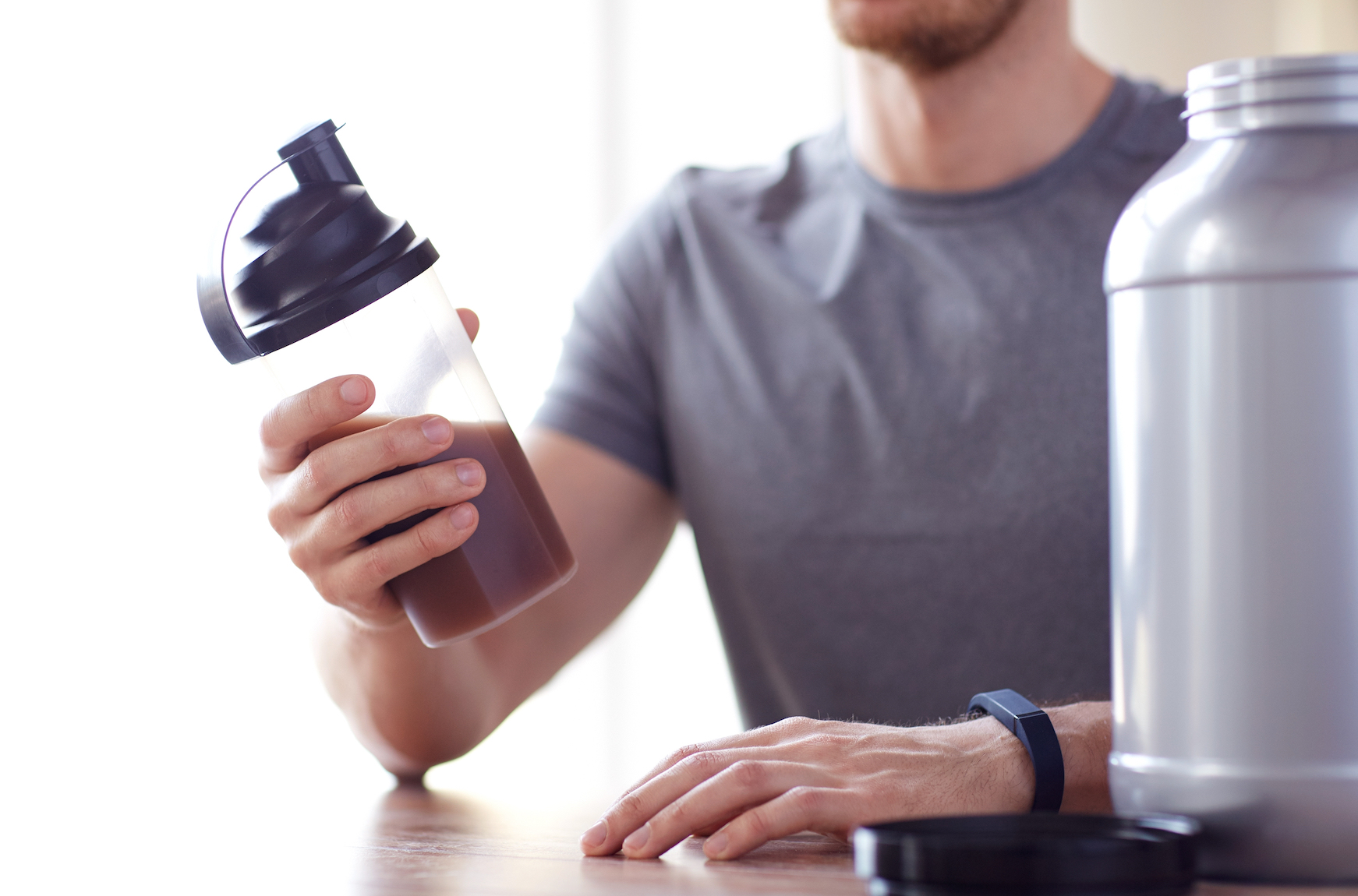 If you’ve ever seen guys at the gym carrying around a protein shaker full of some brightly colored neon liquid, it is very likely that they’re sipping on BCAAs during their workouts.

What are BCAAs exactly?

Basically, BCAAs are a group of 3 essential amino acids. Your body needs them to function properly, but they cannot be synthesized and therefore need to be ingested.

Here are the 3 amino acids that you’ll find in all BCAA supplements:

Let’s briefly go through each of them, one by one, so you can get a sense of what they actually do.

Lucine is arguably the most important of these. This is because it is the only dietary amino acid to directly stimulate muscle synthesis. It has also been found to slow down the degradation of muscle tissue.

In most BCCA supplements, Lucine is what you are getting the most of, generally in a 2:1:1 ratio to the other 2 amino acids.

Isoleucine is the second most important of the bunch. It helps to increase the body’s metabolism of glucose (sugar), as well as aiding in muscular uptake.

Finally there is Valine, which is by far the least important of the 3. In fact, you’d be hard pressed to find a controlled study that suggests it doing much of anything to help with muscle gain or fat loss.

Now here is the surprise…

Most people eat these amino acids every single day without even realizing it!

Yes, they are found in plentiful quantities in most meats, dairy products, and eggs.

Basically, if you have a fairly normal diet – and aren’t restricting any of these food groups – then it is very likely that you’re getting all 3 of these amino acids regularly.

So, if that’s the case, what is the point of taking an additional (and potentially costly) BCAA supplement?

Is that just overkill, or does it actually help in some other way?

That’s a great question – but before we get to that, let’s take a quick look at some of the specific benefits that these amino acids bring to the table.

The Most Important BCAA Benefits

To keep it short, I’ll tell you right now that there are a lot of potential benefits that you’ll get from BCAA.

So, for the sake of brevity, I’ll only go through some of the main ones that you’ll be most interested in.

This is one of the main marketing points that most BCAA supplement companies like to push.

You see, it has been suggested that a decrease in one of the chemicals in your brain (known as 5-HT) is responsible for causing fatigue. BCAAs have been shown to help increase the synthesis of 5-HT, thereby delaying fatigue and letting you have better, longer workouts.

Getting a bit sore after workouts is normal, and even a badge of honor among many people.

However, most people also want their muscles to recover faster, so that they can get back to the gym sooner!

BCAAs can help with this. In fact, a recent study showed that people who took BCAAs during and after their workouts reported less muscle soreness and also decreased inflammation.

Most people who work out are generally interested in anything that can safely help them build muscle faster.

According to various studies, BCAAS may be able to help with just that.

BCAA intake combined with weight training can help maximize protein synthesis. This is because they both trigger something called the mTORC1 signaling pathway, which is responsible for muscle building.

In addition to the various other benefits we’ve already mentioned, BCAAs can also help with fat loss.

In fact, a survey of nearly 5000 people showed that those with higher BCAA intakes were leaner than those with lower intakes.

Specifically, Leucine is thought to be responsible for this, since it is known to increase both energy expenditure and fat oxidization.

When To Take BCAAs

There are various different ways to use BCAA supplements.

But, in general, you want to take them either before, during, or after your workouts – or a combination of all 3.

For instance, you might choose to sip a BCAA shake during your workout (as many people do), and then have one after your workout.

Some people just choose to have one before and after their workouts, so that they don’t have to lug around a protein shaker to the gym.

In terms of quantity, you want to be getting at least 5 grams of leucine with every dosage.

This would typically mean ingesting around 10 grams of BCAAs in each serving, given the 2:1:1 ratio that I mentioned before.

Should You Take BCAAs

Ahh, that is the million dollar question.

Indeed, various supplement companies have literally spent millions of dollars in an attempt to convince you that you should.

But with all the hype around BCAAs, are they actually worth it if you are eating plenty of protein throughout the day?

Is your regular whey protein shake, which also contains these amino acids, sufficient by itself?

And that is if you are doing fasted training.

This could be – and probably will be – an entire article in itself, but for now I’ll give you the basics.

Essentially, fasted training is when you are doing your workouts on an empty stomach, which can help further accelerate fat loss.

Here’s the reasoning behind it…

Whenever you eat anything, the food needs to get broken down into molecules so that it can be used by your body. When this happens, insulin is also released into the bloodstream, which helps to shuttle these molecules around the body to where they’re needed.

The thing is, insulin is also known to decrease lipolysis, which is the process that breaks down fat cells in your body.

When your body enters a fasted state – where it has exhausted its supply of nutrients from the foods you’ve eaten – you will have lower levels of insulin in your blood.

This means that when you exercise in this state, you’ll typically burn more fat than you would if you’ve hadn’t fasted.

Ok, Chris, but what does this have to do with BCAAs?

One of the unfortunate side effects of fasting – especially when working out – is that it can significantly increase muscle breakdown.

So if you exercise fasted a lot, you may have trouble building muscle and maintaining your strength, even though you are taking advantage of the greater amount of fat burning caused by an increase in lipolysis.

If taken during and after periods of fasted exercise, the amino acids they provide will decrease the rate of muscle breakdown (as discussed above).

And, since BCAA supplements contain virtually no calories, they don’t provoke an insulin response in your body, and therefore don’t blunt lipolysis (unlike if you had a regular protein shake before the gym instead).

Unless you are engaging in this type of fasted training, then BCAA supplements simply aren’t worth your money.

You are better off simply eating 30-40 grams of protein before the gym instead, to counteract potential muscle breakdown, and then just make sure your diet includes plenty of meats, cheese, and dairy.

Which BCAA Brand Would You Recommend?

There are lots of different brands of BCAAs – and all of them are fairly similar, in that they all contain the 3 above-mentioned amino acids, in roughly a 2:1:1 ratio.

However, taste can vary significantly between them.

You see, Leucine – the most valuable of the amino acids in BCAA supplements – tastes pretty gross.

Therefore, if you’ve decided to try fasted training, and you don’t want to be dreading your BCAAs before and after each workout, then I’d imagine taste is pretty important to you.

In fact, I’m training fasted the moment myself, and the taste of my BCAAs is very important to me.

For that reason, I’ve been using Scivation XTend BCAAs.

It comes in lots of different flavors, but I’ve found that Raspberry Blue is by far the best tasting, followed by Watermelon.

To be honest, this particular flavor tastes so good that I actually enjoy drinking it (think mixed-berry Kool Aid).

You can order it here from from Amazon.