The Myth Of Needing To Eat 6 Meals A Day 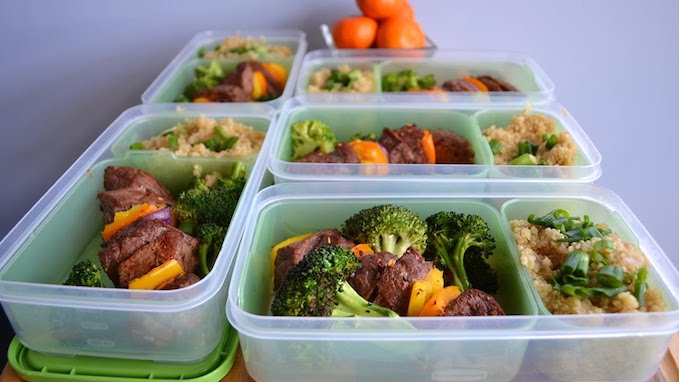 One of the hot topics in nutrition these days is how many times one should eat per day.

There are obviously a TON of different opinions on this, but one of the popular concepts that has taken hold in recent years is that you have to eat lots of small meals, spaced evenly throughout the day.

In general, I refer to this as the “6 meals a day” style of eating.

And many fitness enthusiasts, bodybuilders – and people just trying to get into better shape – have been following this prescription, somewhat blindly, for years!

In fact, I used to do this myself – carefully spacing out my meals every 3 hours as I moderately grazed throughout the day.

But like many fitness beliefs, the basis for all of this dietary dogma is somewhat murky.

So the purpose of this article is to take a good, hard look at the topic of meal frequency, and figure out how many meals you should actually be eating each day.

It has been said that eating more frequently helps to speed up one’s metabolism.

Having a healthy metabolism is important for a variety of reasons, so obviously if this were true having frequent meals would be very beneficial.

However, this hypothesis is based on a number of poorly constructed studies, which primarily center on a the thermic effect of food.

The thermic effect of food, or TEF as it is also known, is the amount of energy that your body requires to metabolize the food that you consume.

And different macronutrients have a different thermic impact. For instance, protein requires more energy to metabolize than fat.

On average, roughly 10% of the calories consumed in a typical diet end up going to TEF.

Therefore, whenever you eat, your metabolism will increase due to TEF.

Now on the surface, this all seems very plausible, and can be seen to confirm the validity of needing to eat a greater number of meals per day.

However, this is a fundamental misunderstanding of the way that TEF actually works.

Let me give you an example to illustrate this.

Now imagine that we have 2 people, both of whom are eating 2400 calories per day, with exactly the same macronutrient composition.

One of them eats those calories spread out across 6 meals, whereas the other people only has 2 meals.

Now, for this example, let’s also assume that the particular composition of macronutrients has a TEF of 10%.

However, despite these differences, the total TEF for each of these people would be exactly the same at the end of the day.

That’s right, there is absolutely no difference in TEF from having larger, less frequent meals vs smaller, more frequent meals (assuming the same total calories and macros).

Indeed, an analysis of multiple studies confirmed this to be true, showing that meal frequency really plays no difference in metabolic rate.

So, as far as the metabolism argument is concerned, eating more often is NOT going to make you lose more weight.

Now another point that greater meal frequency advocates have latched onto is the issue of food intake.

Even if metabolism isn’t impacted by meal frequency, eating more often could still be valuable if it allowed you to better control how much you ended up eating.

And there have been studies, such as the ones conducted on breakfast skippers, that have shown that those who eat less frequently can often tend to overeat.

However, as I pointed out in that article, this is an associative connection rather than a causal one.

The breakfast skippers tended to simply be irregular eaters – and irregular eating patterns are linked to overeating. It wasn’t an issue of meal frequency itself.

On that note, there have been other studies that have shown that eating more frequently tends to result in weight gain. This is attributed to people not decreasing the size of each meal in proportion to the number of meals they eat.

It’s all well and good to eat 6 times a day, but if you are really chowing down each time you eat then it is going to lead to a caloric surplus and resulting weight gain.

In the end, this seems largely individual. Some people report being less hungry when they eat more frequently, whereas other people claim to feel more hungry.

Now for those of us that care about muscle mass and body composition, there is another factor to consider.

There has been a long-held belief in the bodybuilding world that eating more frequently will ensure that your muscles don’t shrivel up and waste away.

This has led to many person lugging around containers of chicken breast, and eating them at set 3 hour intervals, worrying that if they don’t do this they’ll start losing muscle.

This particular belief is grounded in a famous study that was conducted on groups of boxers.

The study ultimately found that the group eating 2 meals per day lost more lean muscle mass than the 6 meal per day group.

However, the design of this particular study was greatly flawed, since both groups of boxers were given inadequate quantities of protein to begin with.

In reality, both groups were prescribed very low calorie diets, and given liquid protein as their main protein source.

Further, the amount of liquid protein given to them was on the very low end.

However, it turns out that both groups ended up losing muscle mass – a fact often conveniently omitted by the greater meal frequency advocates – so it’s not as if eating 6 times somehow saved the day.

And the results would likely have been completely different if they had been given adequate amounts of solid protein (say, at least 1 gram of protein per pound of body weight).

These days, thanks to the popularity of intermittent fasting, there is a considerable amount of anecdotal evidence that you can go long periods of time not eating anything (say, 16 or more hours) without experiencing lean muscle losses, as long as your total daily protein consumption is in the correct range.

The conclusion from all of this, then, shouldn’t be to knock the idea of eating frequent smaller meals, and champion the notion of eating less frequently.

However, what this does tell us is that eating more frequently is simply a matter of preference, and won’t impact your metabolism – nor will it be more lean body mass sparing, as long as your total protein intake is correct.

Further, the notion of eating more frequently for appetite control is largely individual to each of us.

For some people it it is effective – but for other people the opposite is true and they fare better eating fewer, larger meals.

At the end of the day, I would recommend not being dogmatic about meal frequency, and instead trying to figure out the approach that works best for you in terms of maintaining the right caloric levels with the least amount of stress.

For some of my clients, the thought of eating 2-3 large meals seems crazy, and they would rather graze throughout the day. That is completely fine.

For others, they respond much better to dieting – especially when eating at a caloric deficit – if they consume only 2 fairly large meals each day.

Again, this completely comes down to the individual.

But the bottom line is that if you’ve been adhering to a meal schedule where you need to eat every few hours – and eating like this brings you stress and unhappiness – then stop doing it.

It’s safe to say that your metabolism won’t turn to shit and your muscles won’t shrink before your eyes.